Sandbags outside homes and businesses in Enniscorthy after the River Slaney burst its banks (Pic: @hilitetv) Templeshannon Quay in Enniscorthy is impassable due to flooding (Pic: @martinred3) Nutgrove Avenue in Dublin is partially blocked by flood waters A car is towed from flood waters on Enniskerry Road in Stepaside, Dublin Windsurfers made the most of the strong winds in Dublin yesterday Met Éireann has issued a new weather alert for this evening with thundery downpours forecast.

The status yellow rainfall warning is for Dublin, Wicklow, Wexford and Waterford with rainfall amounts of between 20 and 30mm likely.

Flooding has been reported in many areas around Ireland following heavy rain overnight.

In Co Wexford, schools in Enniscorthy have been advised to stay closed today. Both Abbey and Templeshannon quays are flooded and traffic is being diverted.

High tide is expected at 11am and there are concerns the flooding there could get worse.

AA Roadwatch said that due to severe flooding both the new bridge and old bridge have been closed.

Traders in Enniscorthy say the town “is open for business” despite the flooding around the quays.

In Clonmel, flood barriers have been erected but there is no flooding in the town so far, although levels on the River Suir are high.

Iarnród Éireann has said bus transfers are in place between Dundalk and Belfast due to flooding on the line.

Bus Éireann said services are operating as normal, but there are delays on some routes in Meath, Louth and Wicklow due to flooding.

Met Éireann also has a gale warning in operation with strong gusts forecast on coasts from Erris Head to Belfast Lough to Carnsore Point and for the Irish Sea.

Gardaí said there are several incidents of flooding in Dublin and motorists have been advised to drive with caution. 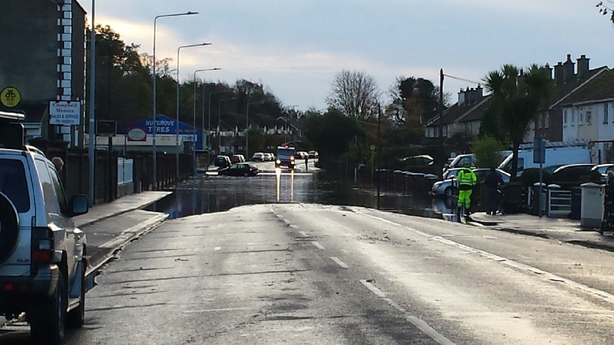 A number of houses on Nutgrove Avenue in Rathfarnham have been flooded and the road was impassable for much of the morning, but has now re-opened between Grange Road and Nutgrove Tyres.

Two motorists were rescued from their cars at Lamb’s Cross in Sandyford this morning and another Dublin Fire Brigade crew was sent to assist motorists at Kinsealy near the golf centre.

GALLERY: Weather photos from around Ireland

There are also reports of flooding in Ballymun, Clonshaugh, Sandymount and Blake’s Cross.

In Wexford town, the old Wexford road at Ferrycarrig and the road at the heritage park are both flooded but passable. 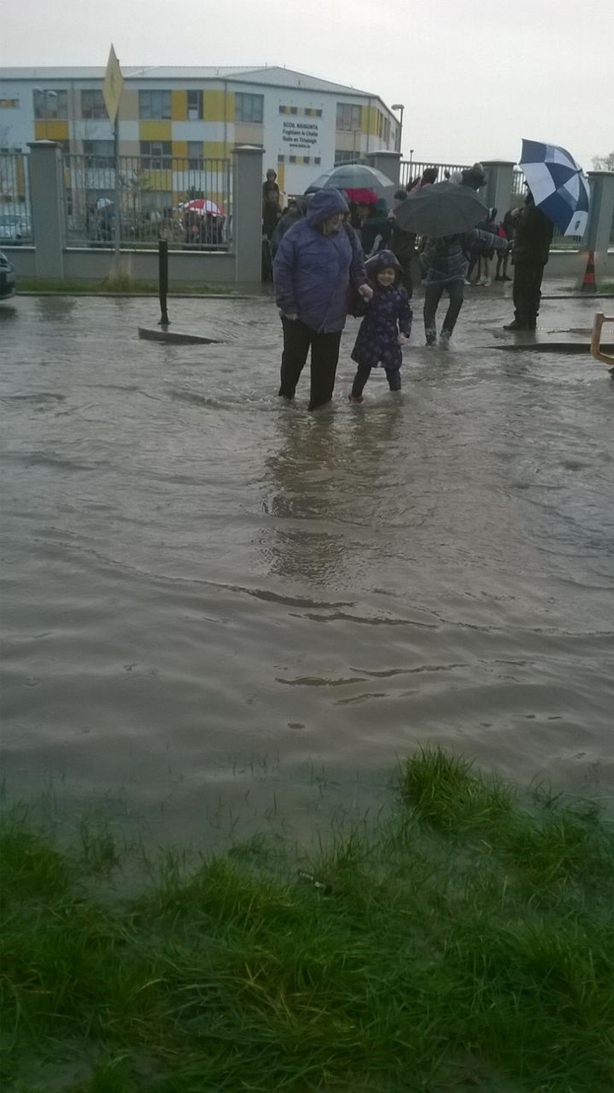 A spokesperson said housing estates were flooded in Cleristown and Rosslare in Co Wexford, in Bettystown and Summerhill in Meath, and in Athy in Kildare.

The M8 motorway, which was closed between Junction 6 and Junction 7 because of surface water, has fully reopened.

In Laois, a motorist had to be rescued by a fire crew after becoming trapped in their car on a flooded road in Milltown.

There is understood to be major flooding on the N80 at Stradbally and the Strand Road at Ballickmoyler.

In Wicklow, there are reports of severe flooding on the N11 on the north side of Kilmacanogue village.

Elsewhere, there are reports of surface water in Drogheda, Stradbally in Co Laois, and Monaghan town.

Marsh Road in Drogheda is closed and Bewley Cross is flooded.

Care is needed on the N62 between Roscrea and Birr due to flooding and in Co Westmeath, the Athlone to Glasson low road is partially blocked and there is flooding on the Ballymahon road in Athlone.

In Waterford major flooding is reported on the main N72 between Dungarvan and Cappoquin and in Ballymacarberry village.

The west of the country escaped the worst of the poor weather conditions overnight.

Gardaí in counties Mayo and Galway say there are no reports of any major problems on the roads so far this morning.

There is some spot flooding on the Portumna Road out of Ballinasloe, while in Co Mayo, motorists are being advised of excess surface water on some routes around Claremorris.

Parts of Northern Ireland have also been badly affected by flooding.

Parked cars have been stranded, shops and houses sand-bagged and traffic diverted in Newry, Co Down.

An area of Belfast close to the Lagan River has also been affected.

Northern Ireland could see 30-40mm falling on high ground tomorrow, a Met Office spokesman said. He added: “Because we have had a lot of rain we could see some localised flooding.”

Newry and Mourne councillor John McArdle said he was wading through water in his Wellington boots, and added: “You would think you are in Venice, that’s what it is like.”

Send your weather photos to yourphotos@rte.ie or tweet @rtenews