Around 60 water charge protesters are in a standoff with contractors in Donaghmede in Dublin.

Irish Water says there are 90 contractor staff being prevented from carrying out work in the Grange Road area.

Today’s protest follows a similar action yesterday when workers with GMC/Sierra were prevented from leaving for nine hours.

There are 13 vans parked on Grange Rd and local protesters have prevented vans from leaving by standing in front of them when they try to move.

The vans and uncompleted meter installation sites have notices of a High Court order warning protesters not to interfere.

Around ten gardaí are on the scene.

A number of local protesters are before the High Court today accused of breaching its orders.

Elsewhere, the anti-water charges group “We Won’t Pay” has insisted water bills will be met by a major boycott next year.

The group led by Socialist Party TDs called the expected concessions temporary and said they would give way to a steep rise in water charges in the future. 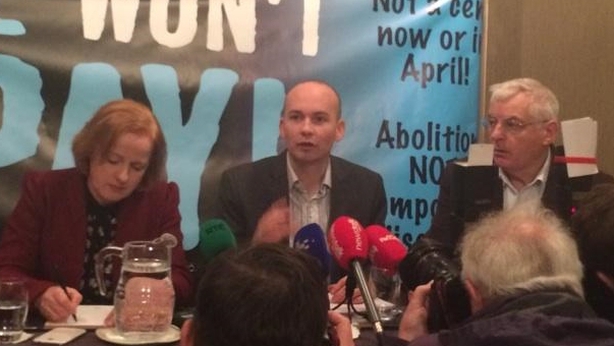 Joe Higgins TD said there was no carrot big enough to quell the anger of vast parts of the population.

Paul Murphy TD said people were not stupid and would not be bought off and he said water charges would be the big issue in the general election.

He said protesters had been vilified.

Ruth Coppinger TD said the property tax had been deducted from her salary as she had not paid.

Paul Murphy also said he had nothing to apologise for when asked if he would be saying sorry to Tánaiste Joan Burton.

He added that there was antisocial behaviour at Jobstown on Saturday but they were not part of the protest and any violence happened afterwards.

Mr Higgins said the campaign was a mass mobilisation movement without a defined membership.