A stunning Robin van Persie hat-trick was enough to put Manchester United into the quarter-finals of the Champions League and relieve the pressure on their beleaguered manager David Moyes.

Van Persie, who left the pitch on a stretcher late on, converted a first-half penalty and scored on the brink of half-time before he struck the final goal of the 3-0 win with a free-kick just after the restart.

The win meant that United saw off the challenge of Olympiakos 3-2 on aggregate.

The Theatre of Dreams turned into the scene of Moyes’ worst nightmare on Sunday when United lost 3-0 to Liverpool and questions arose about the manager’s future.

But the United boss got everything spot on against the Greek side.

The odds were against the United boss. The last time the Red Devils came back from 2-0 down in the first leg was 30 years ago when Bryan Robson inspired the team to a rousing 3-0 win over a Barcelona side that included Diego Maradona.

It was another United Stalwart, Ryan Giggs, who bossed the game against Olympiakos.

Moyes’ decision to deploy the 40-year-old in the middle of the park proved to be a masterstroke; he played a key role in the build-up to the first two goals and excelled throughout. 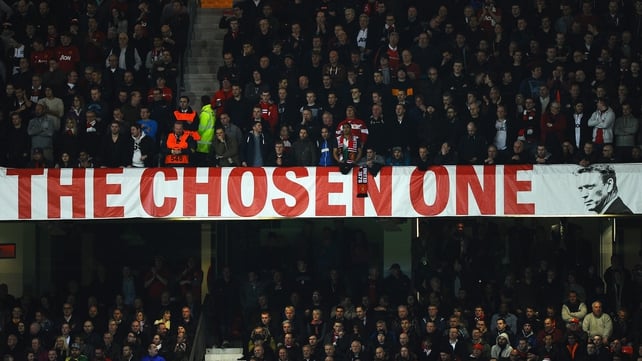 A battered and bloodied Antonio Valencia, who was given a black eye early in the first half, also put in a fine display.

United, knowing only a big win would send them through, went at Olympiakos from the off but they were frustrated by the tenacious visitors, who did everything they could to break play up.

Valencia jumped for the ball with Joel Campbell and ended up with a black eye that left him barely able to see. Moyes looked concerned, but the winger continued after treatment.

Kostas Manolas and Alejandro Dominguez saw yellow for petty fouls while Michael Carrick also entered the book for a foul on Hernan Perez.

Perez picked himself up and went down the other end, gaining a yard inside the United box but he fired over. The midfielder fell to the turf and placed his head in his hands. He knew he had missed a gilt-edged chance.

Giggs forgot he was 40 for a moment and his attempt at skinning the Olympiakos right-back ended in embarrassing failure.

But the United veteran showed why he was recalled to the team moments later when he lofted a delicious ball over the top towards Van Persie. Jose Holebas barged over the Dutchman and the referee had no option but to give a penalty, which Van Persie duly converted..

The Welshman picked out Rooney with a pin-point pass and the England frontman squared to Van Persie, who tucked away the simplest of side-footed finishes. Moyes clenched his fists in a rousing celebration.

Five minutes after the restart United claimed the third goal they needed. Danny Welbeck went down under the faintest of challenges from Manolas, and the referee awarded a free. Van Persie clipped the resulting free kick over the wall and a bamboozled Roberto watched it drift past him.

In scoring his hat-trick, Van Persie joined an elite group of Manchester United players who have bagged Champions League hat-tricks. Andy Cole, Ruud van Nistlerooy, Michael Owen and Wayne Rooney are the only others to achieve a similar feat.

Although Moyes will be delighted with his team’s result, he will have concerns about their performance.

United had goalkeeper David de Gea to thank on more than one occasion for staying in the competition, the young Spaniard pulling off a particularly impressive double save just before Van Persie’s second.