US hiring fails to rebound strongly from winter chill – Reuters

US hiring fails to rebound strongly from winter chill – Reuters 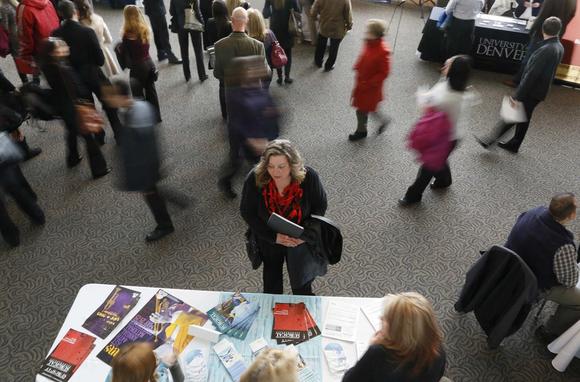 A job seeker (C) talks to an exhibitor at the Colorado Hospital Association health care career fair in Denver April 9, 2013.

WASHINGTON (Reuters) – U.S. job creation slowed sharply over the past two months, turning in the weakest performance in three years and raising the prospect that the economy may be losing momentum.

At the same time, however, the unemployment rate hit a new five-year low of 6.6 percent in January even as Americans piled back into the labor market to search for work.

The Jekyll and Hyde report from the Labor Department on Friday whipsawed U.S. markets in early trade. Many economists cautioned against reading too much into it given the extreme weather that has hit much of the nation this winter.

“This definitely still keeps the questions in play about the strength of the economy,” said Anthony Valeri, an investment strategist at LPL Financial in San Diego. “We probably won’t get a clean read on the data until early March.”

Nonfarm payrolls rose only 113,000 last month after a meager 75,000 gain in December, the report showed. Economists had expected payrolls to rise 185,000 in January and had looked for a big upward revision to December that failed to materialize.

While weather was believed to have weighed on hiring in December, it did not appear to be a major factor last month.

There were strong gains in the weather-sensitive construction sector, and while a survey of households found 262,000 Americans were unable to work due to the weather, the department said that was in line with historical trends.

The second straight month of weak hiring – marked by declines in retail, utilities, government, and education and health employment – could be a problem for the Federal Reserve, which is tapering its monthly bond-purchasing stimulus program.

However, its next policy-setting meeting is not until March 18-19. By then, the economic clouds may have cleared.

U.S. stock futures initially dropped sharply as investors registered disappointment with the weak payrolls figures, but the market opened higher. Similarly, money flooded into the safety of the bond market but quickly reversed, as did a decline in the dollar against the euro.

The economy grew at a robust 3.7 percent annual rate in the second half of 2013, buoying hopes that it was now on a path to sustained growth.

But that optimism is now being tested. A report on Monday showed a surprise drop in factory activity to an eight-month low in January and automakers have reported slower sales.

The tenth of a percentage point drop in the jobless rate in January, which took it to the lowest level since October 2008, provided a silver lining in the employment report, and kept hopes of stronger growth alive.

Unlike the poll of employers used to calculate the payrolls figures, the household survey from which the jobless rate is derived found strong gains in employment.

The increase in the number of people in the labor force also provided an encouraging sign. The participation rate, or the proportion of working-age Americans who have a job or are looking for one, increased to 63 percent from 62.8 percent in December, when it fell back to the more than 35-year low hit in October.

The proportion of working-age Americans with a job rose to 58.8 percent, the highest since October 2012.

A broad measure of underemployment that includes the unemployed, people who want a job but who have stopped looking and those working part time for economic reasons dropped to 12.7 percent, its lowest level since November 2008.

The unemployment rate is now flirting with the 6.5 percent level that Fed officials have said would trigger discussions over when to raise benchmark interest rates from near zero.

But policymakers have made it clear that rates will not rise any time soon even if the unemployment threshold is breached.

The private sector accounted for all the hiring in January. Government payrolls fell 29,000, the largest decline since October 2012.

Manufacturing employment increased 21,000, rising for a sixth month. Retail sector jobs fell 12,900 after strong increases in the prior months, the first decline since March.

Construction payrolls bounced back 48,000 after being depressed by the weather in December. It was the largest increase since March 2007.

Average hourly earnings rose five cents. The length of the workweek was steady at an average of 34.4 hours.

Friday’s report included revisions to data on payrolls, the workweek and earnings going back to 2009. The revisions showed 369,000 more jobs were created than previously thought in the 12 months through March 2013.