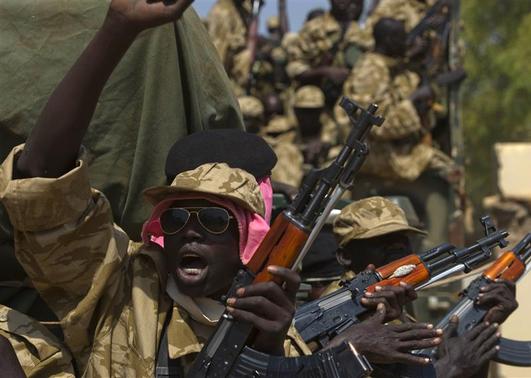 JUBA (Reuters) – A U.S. aircraft came under fire from unidentified forces on Saturday while trying to evacuate Americans from a spiraling conflict in South Sudan. The U.S. military said four of its members were wounded in the attacks.

Nearly a week of fighting in South Sudan threatens to drag the world’s newest country into a Dinka-Nuer ethnic civil war just two years after it won independence from Sudan with strong support from successive U.S. administrations.

The U.S. aircraft came under fire while approaching the evacuation site, the military’s Africa Command said in a statement. “The aircraft diverted to an airfield outside the country and aborted the mission,” it added.

The statement said all of the three Osprey CV-22 aircraft involved in the mission had been damaged.

Consequently, U.S. President Barack Obama warned that any move to take power by military means would lead to an end of U.S. and international community support for South Sudan.

The United Nations mission in South Sudan said one of four U.N. helicopters sent to Youai, in Jonglei state, had come under small-arms fire on Friday. No crew or passengers were harmed.

Hundreds of people have been killed in the fighting between Dinka loyalists of President Salva Kiir and Nuer supporters of former Vice-President Riek Machar, who was sacked in July and is accused by the government of trying to seize power.

Fighting has spread from the capital, Juba, to vital oilfields and the government said a senior army commander had defected to Machar in the oil-producing Unity State.

The German military said on Saturday it had evacuated 98 people, including Germans and other nationals, from South Sudan by air to neighboring Uganda. The German ambassador to South Sudan was among them, the Foreign Ministry in Berlin said.

A separate plane took Lieutenant-General Hans-Werner Fritz, chief of Germany’s Operations Command, along with his aides and five other Germans, to Berlin, the military said.

After meeting African mediators on Friday, Kiir’s government said on its Twitter feed that it was willing to hold talks with any rebel group. The United States is sending an envoy to help find a negotiated solution.

South Sudan’s foreign minister, Barnaba Marial Benjamin, told Reuters the government had given African mediators the go-ahead to meet Kiir’s rivals, including Machar and his allies.

Ethiopia’s Foreign Minister Tedros Adhanom, who led an East African delegation of foreign ministers in Juba aimed at mediating between the feuding sides, said the team did not manage to meet Riek Machar face to face, neither did they make phone contact.

“We are trying to contact them. We are hopeful of having both sides on the negotiating table within the space of 10 days,” Tedros told Reuters.

In their meeting with Kiir, Tedros said they were also aiming to get humanitarian aid to afflicted populations unhindered.

Benjamin said Lieutenant-General Lazarus Sumbeiywo, sent to South Sudan by Kenyan President Uhuru Kenyatta, had stayed behind along with a Kenyan diplomat after the African mediators left on Saturday and would work on making contact with Machar.

Sumbeiywo was the chief mediator in the talks that led to the signing of the 2005 peace agreements with north Sudan.

“So on the side of the government … we have established dialogue without any condition,” Benjamin said. “All we say, we urge former Vice-President Riek Machar not to incite the people of South Sudan through ethnic configuration.”

United Nations staff say hundreds of people have been killed across the country, which is the size of France, this week and that 40,000 civilians are sheltering at U.N. bases.

The United Nations said on Friday at least 11 Dinka civilians had been killed during an attack by about 2,000 armed youths from another ethnic group on a U.N. peacekeeping base in Jonglei state. Two Indian peacekeepers were also killed.

U.N. Secretary-General Ban Ki-moon condemned the attack and called on Kiir and Machar “to come to the table and find a political way out of this crisis”.

“They’re responsible to the people of South Sudan to end the crisis and find a political means of resolving their differences,” Ban told a news conference in the Philippines.

The African Union called on Saturday for a Christmas ceasefire, and its chairwoman Nkosazana Dlamini-Zuma described the killings of civilians and U.N. peacekeepers as a war crime.

Toby Lanzer, the U.N. Humanitarian Coordinator in South Sudan, said via Twitter that Bor, in Jonglei state, remained tense. “We’ve heard clashes & seen bodies in the streets. Civilians have left town to flee for their safety,” he wrote.

Information Minister Michael Makuei told Reuters an army divisional commander in Unity State, John Koang, had defected and joined Machar, who had named him the governor of the state.

Jacob Dut, a political science lecturer at the University of Juba, said most army divisions had between 10,000 and 13,000 troops, although not all were fully manned.

“Division 4 (Koang’s unit) is adjacent to the border with Sudan. That means there is more military hardware and that means that this defection is a big loss,” Dut said.