Wayne Rooney is dejected after the game

Darren Bent’s last-gasp equaliser left Manchester United shattered after the champions thought they had saved themselves from another desperate day but Fulham left with a point after a 2-2 draw.

Trailing to Steve Sidwell’s first-half opener, United’s search for redemption lasted until the 79th minute before Robin van Persie and Michael Carrick struck within the space of 120 seconds to turn the match on its head.

Carrick’s goal brought Wayne Rooney to his knees in celebration and had manager David Moyes punching the air with relief.

But the celebrations were cut short in the fourth minute of stoppage time as David de Gea turned away Kieran Richardson’s shot, but sent the ball straight into the path of substitute Bent who nodded into an empty net.

Now it was former United assistant Rene Meulensteen’s turn to punch the air as his side, rock bottom of the Barclays Premier League and five points adrift of safety at kick-off, snatched a precious point.

For Moyes and United, now nine points away from a Champions League place, a hellish season just keeps getting worse. And, with a visit to Arsenal on Wednesday, there is no end to the trouble in sight.

Moyes admitted in the build-up that Meulensteen knew more about the home players than he did, something that can only be expected after spending six years as Alex Ferguson’s assistant until last summer. 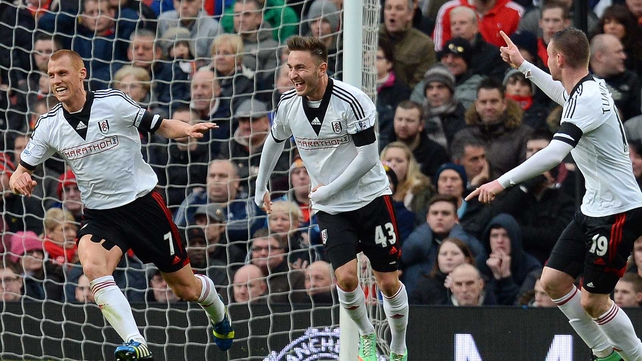 What was less obvious was the Dutchman’s method of taking advantage of that inside knowledge.

In axing Scott Parker and Brede Hangeland and placing his faith in 18-year-old debutant Muamer Tankovic and midfielder Ryan Tunnicliffe, he was injecting his side with vitality so obviously lacking over an eight-game run that brought just a single win.

So while the visitors required a scrapper’s instinct to survive the inevitable bombardment, it meant they had the pace to exert pressure on their hosts when the counter-attacking opportunities came.

Lewis Holtby was the inspiration behind the visitors’ opener. 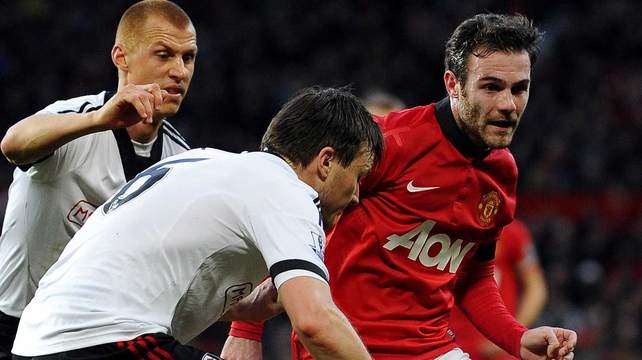 Allowed far too much room to advance down the left flank, Holtby was able to drop a superb cross into the heart of United’s penalty area.

Nemanja Vidic had been pulled out of possession and as neither Darren Fletcher nor Juan Mata had tracked Sidwell’s run, the midfielder was able to slide the ball past a stranded De Gea with a degree of comfort.

It was the first time Fulham had scored an opening goal since December – and they should have scored more.

Holtby created a golden chance for Richardson but the former Red Devils man blazed over.

Then Richardson scorched past Vidic, only for Wayne Rooney to intercept a cut-back that looked certain to set up Holtby.

In a season of shattering blows, Meulensteen looked set to inflict the heaviest of all. 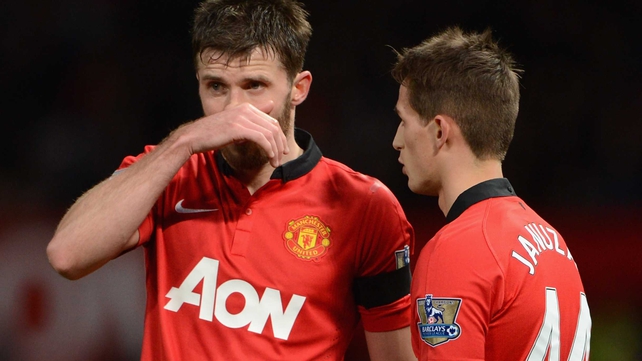 Even John Arne Riise came close with a chested clearance to an Ashley Young cross that was far too close to Stekelenburg’s goal for comfort.

But that attacking instint that has terrorised so many opponents down the years was missing from the hosts’ game.

When Fletcher lifted the ball deep into the area for Van Persie to head into the six-yard box, no one had gambled and Fulham were able to clear with ease.

A rather desperate claim for handball by Van Persie against John Heitinga emphasised the concern starting to grip Old Trafford.

Adnan Januzaj’s introduction for Fletcher, followed by the arrivals of Javier Hernandez and Antonio Valencia, meant United had six offensive players trying to score against a team that had kept just four clean sheets all season.

Really, United could not fail to score.

It was noticeable the accompanyment to Van Persie tucking home Juan Mata’s cross at the far post was merely to lead a charge back to halfway, knowing the job was only half done.

When Carrick’s shot looped in off Parker a couple of minutes later it seemed something was finally going to go Moyes’ way.

The Scot should have known better.

Bent will rarely get an easier goal when it came in the fourth of five added minutes, and while the boos at full-time were half-hearted, there really is little positive that can be said of Moyes’ reign right now.