Violent protests have been raging in the Ukrainian capital (Pic: EPA) Ukrainian protesters will go “on the attack” if President Viktor Yanukovych does not offer concessions, opposition leader Vitali Klitschko said after fierce clashes in Kiev yesterday.

“If Yanukovych does not make concessions, then tomorrow (Thursday) we will go on the attack,” Mr Klitschko told tens of thousands of protesters crammed into Independence Square.

He said Mr Yanukovych could resolve the situation without bloodshed by calling early elections.

Protesters and police are locked in a tense standoff at the site of deadly clashes that activists said left five dead.

Riot police were holding their line on Grushevsky Street in central Kiev as hundreds of protesters faced them on the other side of barricades, television pictures showed.

There were sporadic clashes with demonstrators throwing stones and the police responding with stun grenades but there was a relative lull compared with yesterday’s clashes. 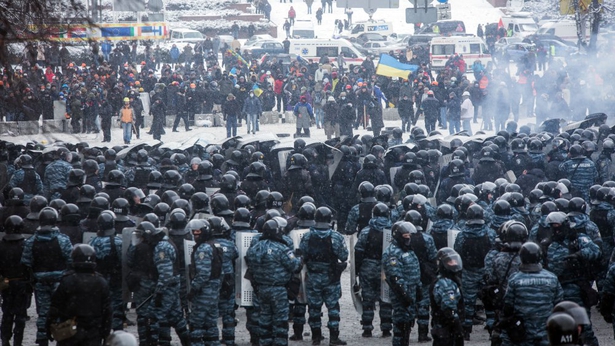 The demonstrators had overnight further fortified their barricades with sandbags filled with snow.

Their frontline was marked by burning tyres which were still on fire in blazes that the police had been unable to extinguish despite the use of water cannon.

Meanwhile, Russia said it will not intervene in the anti-government protests in Ukraine and believes its leadership will find a way out.

President Vladimir Putin’s spokesman Dmitry Peskov said: “We consider we do not have the right to intervene in any way in the internal affairs of our brother Ukraine.

“That’s unacceptable and Russia has not done this and will not do it.”

Mr Putin has yet to comment personally on the latest violent clashes in Kiev in which five activists have been killed, four of them reportedly with gunshots, and police deployed tear gas, stun grenades and rubber bullets. 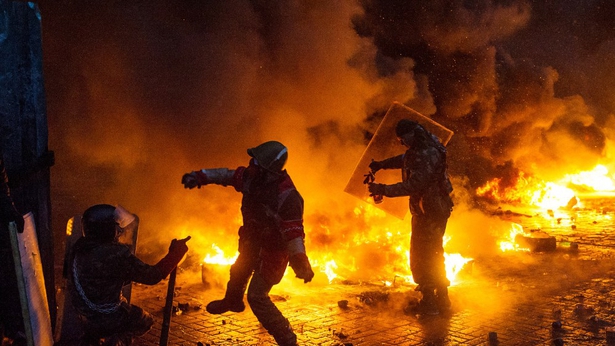 The protests broke out in November after President Yanukovych rejected a deal for closer integration with the European Union under pressure from Russia.

Mr Peskov said that the Kremlin viewed events in Ukraine “with huge attention, with anxiety and sometimes with pain,” but was confident President Yanukovych would resolve the situation.

“From outside they are telling them what to do. For us, this is an absolutely inconceivable situation. Of course we cannot approve this and instead it makes us feel outraged,” he added.