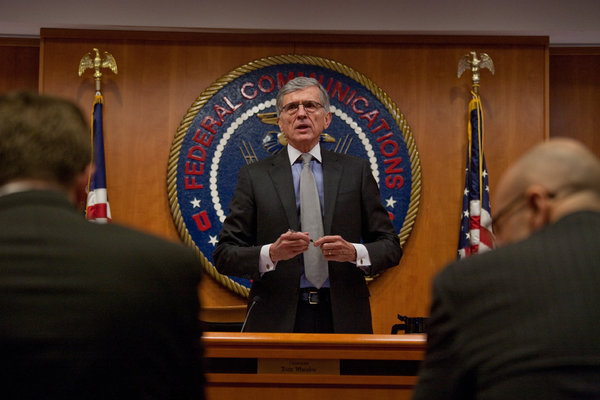 Tom Wheeler, the new chairman of the Federal Communications Commission, on Thursday.

News from the technology industry, including start-ups, the Internet, enterprise and gadgets.
On Twitter: @nytimesbits.

WASHINGTON — The Department of Transportation said on Thursday that it would consider banning the use of cellphones for voice calls in-flight. The Federal Communications Commission is considering loosening the rules, a proposal that has prompted widespread outrage.

While the F.C.C. voted to approve its proposal on Thursday, all five commissioners voiced some skepticism about the public’s – and their own – willingness to endure calls while sitting in a cramped airline seat for hours. The F.C.C. will now solicit public comment on whether to change its rules banning the use of cellphones.

If both government agencies move forward with their plans, airline passengers will most likely be able to text and surf the Web on their cellphones while aloft, but not to make voice calls.