Home/Technology/The Man from the Future: The Visionary Life of John von Neumann, reviewed
Previous Next 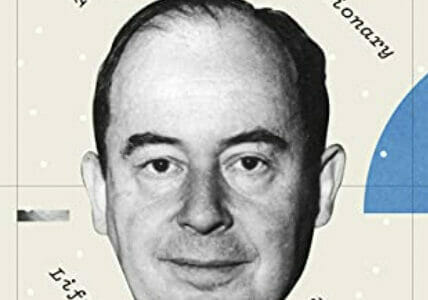 We look at this book which captures the impressive and wide ranging intellectual breakthroughs by the genius that was John von Neumann. Written by Ananyo Bhattacharya, you can see more about the book here.

Depending on your areas of knowledge you may well have heard of von Neumann before, the question is, which area are you aware of, because he was massively influential in so many areas. Bhattacharya takes us on a well written and well explained tour through the serial topics in which Jonny demonstrated his genius and excellence. As a computer science student we were aware of the break throughs in computing based on the von Neumann models. However we didn’t realise that John Nash and his work on game theory was also massively influenced by von Neumann, and this is one of many areas in which he briefly passed through and left a transformative a lasting influence.

Want to know why you should add ‘The Man from the Future’ to your already-far-too-long reading list? See the thread on John von Neumann below… https://t.co/vzzbPIed8F

We really enjoyed reading this book, and became even more impressed by the insights from this brilliant mind. In many ways Bhattacharya simply gets out of the way and lets the story unfold. He has chosen a fantastic subject to work with, and there are so many great stories and anecdotes you almost need to just strap yourself in and enjoy the ride. In terms of popular science this is a smart and informative book. We have been recommending it to several potential readers already, and we strongly suggest you check it out.

More about the new biography of John von Neumann: the lost genius who invented our world.

The smartphones in our pockets and computers like brains. The vagaries of game theory and evolutionary biology. Self-replicating moon bases and nuclear weapons. All bear the fingerprints of one remarkable man: John von Neumann.

Born in Budapest at the turn of the century, von Neumann is one of the most influential scientists to have ever lived. His colleagues believed he had the fastest brain on the planet – bar none. He was instrumental in the Manhattan Project and helped formulate the bedrock of Cold War geopolitics and modern economic theory. He created the first ever programmable digital computer. He prophesied the potential of nanotechnology and, from his deathbed, expounded on the limits of brains and computers – and how they might be overcome.

After the war, von Neumann criss-crossed the US in search of more computational power for bomb-related calculations. He joined the ENIAC project, and in 1945, produced the EDVAC report, the blueprint for the modern stored-program computer–from smart phone to desktop 7/ pic.twitter.com/S5u9uOz9CY

Taking us on an astonishing journey, Ananyo Bhattacharya explores how a combination of genius and unique historical circumstance allowed a single man to sweep through so many different fields of science, sparking revolutions wherever he went.

Insightful and illuminating, The Man from the Future is a thrilling intellectual biography of the visionary thinker who shaped our century.

Ananyo Bhattacharya is a science writer who has worked at the Economist and Nature. Before journalism, he was a medical researcher at the Burnham Institute in San Diego, California. He holds a degree in physics from the University of Oxford and a PhD in protein crystallography from Imperial College London.