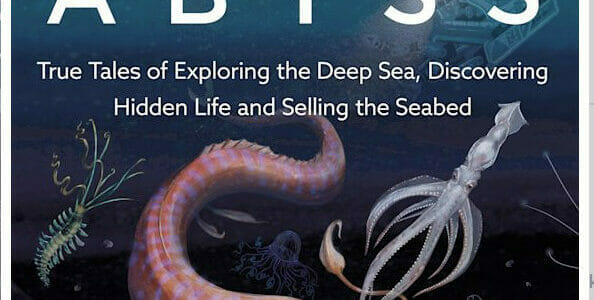 This is a thoughtful and provoking book that asks us to both learn more about the deep sea below us, and also to consider that how we treat it affects us all. Written by Helen Scales, The Brilliant Abyss is published by Bloomsbury here.

It has often been said that we know more about the moon than we do about our own oceans. As Scales further explains we, as a species, have also spent many many more nights in space than anyone has ever spent under the sea. With a useful illustration on the last two pages of the book Scales also reminds us how quickly light ceases to penetrate the oceans the deeper down we go. The oceans are fascinating, amazing and beautiful places, this book does a great job of capturing this sense of wonder, and then walking through the variety of ways in which it is special and that we need to look after them too.

It is slightly shocking and then also completely unsurprising how much junk, rubbish, toxins, and then plastics upon plastics that we have dumped into our seas. Of course for a long time the oceans were seen as ‘ bottomless’ and therefore these actions were inconsequential. Sadly this has not proved to be the case, and, allied with all the other ways that humans have triggered climate change, so too our misuse of the oceans has stored up some problems for us now, and certainly into the future.

The book is not all doom and gloom however as there are some great passages explaining about how much we have learned from volcanic vents, supporting life, based on completely different ways of living. These insights have helped to reshape the search for life on other planets, as we realised it may not need to be based on carbon, oxygen or many other elements that had been seen to be the building blocks of life.

This is both an enjoyable and also highly informative read, check it out.

More about the book

A marine biologist vividly brings alive the extraordinary ecosystem of the deep ocean—a realm about which we know less than we do about the Moon—and shows how protecting rather than exploiting it will benefit mankind.

“The oceans have always shaped human lives,” writes marine biologist Helen Scales in her vibrant new book The Brilliant Abyss, but the surface and the very edges have so far mattered the most. “However, one way or another, the future ocean is the deep ocean.”

A golden era of deep-sea discovery is underway. Revolutionary studies in the deep are rewriting the very notion of life on Earth and the rules of what is possible. In the process, the abyss is being revealed as perhaps the most amazing part of our planet, with a topography even more varied and extreme than its Earthbound counterpart. Teeming with unsuspected life, an extraordinary interconnected ecosystem deep below the waves has a huge effect on our daily lives, influencing climate and weather systems, with the potential for much more—good or bad depending on how it is exploited.

Currently the fantastic creatures that live in the deep—many of them incandescent in a world without light—and its formations capture and trap vast quantities of carbon that would otherwise poison our atmosphere; and novel bacteria as yet undiscovered hold the promise of potent new medicines. Yet the deep also holds huge mineral riches lusted after by many nations and corporations; mining them could ultimately devastate the planet, compounded by the deepening impacts of ubiquitous pollutants and rampant overfishing.

Eloquently and passionately, Helen Scales brings to life the majesty and mystery of an alien realm that nonetheless sustains us, while urgently making clear the price we could pay if it is further disrupted. The Brilliant Abyss is at once a revelation and a clarion call to preserve this vast unseen world.

More about the author Helen Scales

Helen Scales is a marine biologist, writer and broadcaster. Her stories of the ocean appear in various publications including National Geographic Magazine, the Guardian and New Scientist. Among her books are the Guardian bestseller Spirals in Time which was nominated for the Royal Society of Biology Book Award, the children’s book The Great Barrier Reef and New Scientist book of the year Eye of the Shoal. Helen teaches at Cambridge University, is scientific advisor to the marine conservation charity Sea Changers, and divides her time between Cambridge, England and the French coast of Finistère. @helenscales / helenscales.com