Texas Jack, Last Instalment and Baily Green (left to right) fought out an exciting finish of the Kinloch Brae Chase

Texas Jack took top honours in the Kinloch Brae Chase at Thurles as the high-class Last Instalment finished an honourable third on his eagerly-anticipated return from injury.

Philip Fenton’s Last Instalment won twice at Grade One level as a novice over fences a couple of seasons ago and although sidelined by injury for almost two years, he was the 9-4 favourite to make a winning return.

The nine-year-old travelled strongly and jumped noticeably well for Bryan Cooper and was still in with a chance of victory at the final fence.

He just tired in the closing stages, however, leaving Noel Meade’s 4-1 shot Texas Jack to come through and claim the Grade Two prize under a typically cool Paul Carberry ride.

The Mouse Morris-trained Baily Green just edged out Last Instalment for second, but Fenton was thrilled with his returning star’s performance and is now eyeing the Hennessy Gold Cup at Leopardstown next month.

Fenton said: “It was a lovely comeback. He travelled well and was probably a little bit fresh early on.

“Going to the second-last he got a bit tight underneath it, but he fiddled it well. There was still a race on, but he just probably needed the race and blew up.

“There should be a lot of improvement to come and we’d be over the moon with the run.

“We’d like to think we could turn up for the Hennessy. If he’s sound and hardy tomorrow, we’ll see how he progresses in the next 10 or 12 days, and if he tells us he’s ready for the Hennessy, that’s the next port of call.”

Meade said of the winner: “He jumped like a buck. He didn’t jump as well the last day and I think he loved having Paul back on him again.

“He has a few options. I think that is probably his trip – I’m not sure he gets much further than two and a half miles.

“I suppose we’ll put him in the Ryanair Chase, but I think he’s a horse to stay at home with, rather than go to Cheltenham.” 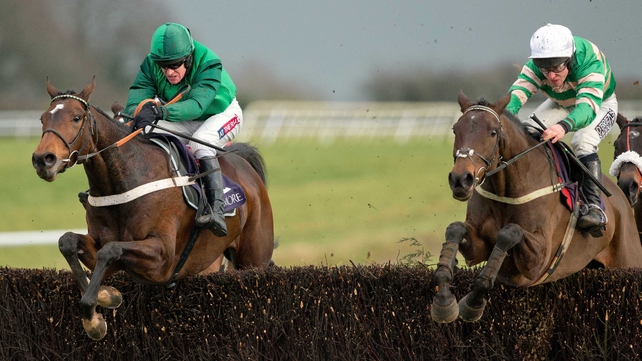 Nicky Henderson’s Cheltenham Festival-winning hurdler Une Artiste was a first ever runner at the track for the champion trainer and was 6-5 favourite to secure a second victory over fences in this Grade Two contest.

Byerley Babe, who opened her chasing account at Limerick’s Christmas Festival, was next best in the market as a well-supported 3-1 shot.

Une Artiste was the first of the pair to commit for home in the hands of Barry Geraghty, but Byerley Babe was travelling powerfully in behind in the hands of Phillip Enright.

There was little to choose between the pair jumping the final obstacle and after a thrilling tussle on the run-in, they passed the post virtually as one.

After a brief wait, the judge called Byerley Babe the winner by a nose.

Tyner said: “She got a bit tight to the fourth-last, but I thought she’d sail past them at the next. Phillip said she just drifted a little to the left on the run-in.

“She’s a fine, big strong mare who travels well in her races.

“It was a black type race and a nice pot, so it’s great to win it.

“She’s not qualified for the next mares’ chase back here in a few weeks and she might run next in a Graded race at Limerick on St Patrick’s weekend.” 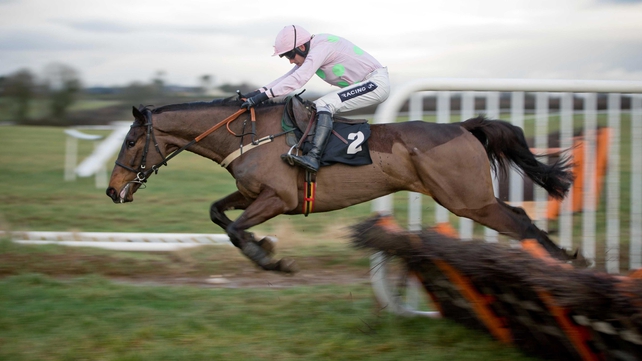 The impressive Punchestown bumper winner scraped home on his debut over hurdles at Leopardstown last month, but may have booked his ticket to the Cheltenham Festival with his latest 18-length victory under Ruby Walsh.

Mullins said: “He made a mistake at the second hurdle in Leopardstown. Ruby said he was unsighted by a shadow, he landed on the middle of the hurdle and it upset him.

“He was foot-perfect today. He looks like he needs a trip, two miles and six (furlongs) or three miles.

“I thought he was our bumper horse for Cheltenham last year. He was our pick all of the spring time, but he didn’t make it.

“He probably won’t have a run between now and the Festival and the Albert Bartlett might be the race for him.”

Francis Flood jnr said: “You would expect him to do that after his Leopardstown run and we may target him at a Listed hurdle in Naas just before Cheltenham.”

McParlan completed a double in the Arctic Tack Stud Hunters Chase aboard 10-1 shot Carsonstown Boy, with 5-6 favourite Oscar Delta, so heartbreakingly denied in the Foxhunter Chase at Cheltenham last year when unshipping jockey Jane Mangan on the run-in, staying on for third.

Oscar Delta’s trainer, Jimmy Mangan, said: “I was delighted with the run. It was very encouraging and he would have needed it.

“He will have one more point-to-point run and then go back to Cheltenham.”

Winning trainer Colin McBratney said: “He likes to dictate the pace and in Down Royal the last day he was running against class horses and he wasn’t able to dictate, so he got disappointed.

“He’s a good fun horse and I think we’ll go back to point-to-points before maybe going to Fairyhouse.”