Home/Headlines/Search for Malaysian plane ‘could take years’
Previous Next The search for the missing plane involves 60 aircraft and ships

The search for missing Malaysia Airlines Flight MH370 could take years, a US Naval Officer has suggested.

Days before its batteries are set to die, search and rescue officials are racing to locate the plane’s black box recorder.

Ten ships and ten aircraft are searching a massive area in the Indian Ocean west of Perth.

They are trying again to find some trace of the aircraft, which went missing more than three weeks ago.

The plane is presumed to have crashed in one of the most remote areas on the planet.

An Australian navy ship, the Ocean Shield, has been fitted with a sophisticated US black box locator and an underwater drone.

It is expected to leave port and join the search later in the day. 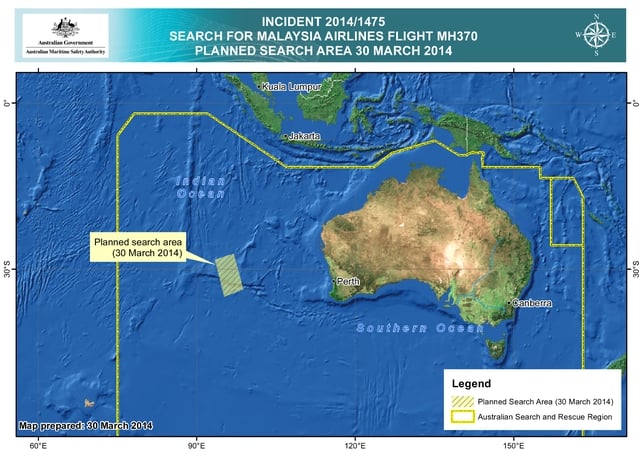 But US Navy Captain Mark Matthews, who is in charge of the US Towed Pinger Locator (TPL), told journalists at Stirling Naval Base near Perth that the lack of information about where the plane went down seriously hampers the ability to find it.

“Right now the search area is basically the size of the Indian Ocean, which would take an untenable amount of time to search,” he said.

“If you compare this to Air France Flight 447, we had much better positional information of where that aircraft went into the water,” he said.

It took more than two years to find the Air France plane, which crashed in 2009 near Brazil.

Numerous objects have been spotted in the two days since Australian authorities moved the search 1,100km (685 miles).

However, no objects have been confirmed as coming from Flight MH370.

The search moved after new analysis of radar and satellite data concluded the Boeing 777 travelled faster and for a shorter distance after vanishing from civilian radar screens on 8 March.

Australia is coordinating the search in the southern Indian Ocean.

It said it had established a new body to oversee the investigation and issued countries involved in the search a set of protocols to abide by should any wreckage be found.

Malaysia says the plane, which disappeared less than an hour into a flight from Kuala Lumpur to Beijing, was likely diverted deliberately.

However, investigators have determined no apparent motive or other red flags among the 227 passengers or the 12 crew.

Both a Chinese ship and an Australian navy vessel have picked up objects, but nothing has been linked to Flight MH370.

The search has involved unprecedented cooperation between more than two dozen countries and 60 aircraft and ships.

But it has also been hampered by regional rivalries and an apparent reluctance to share potentially crucial information due to security concerns.

This week, Australia issued a set of rules and guidelines to all parties involved in the search, giving Malaysia authority over the investigation of any debris to be conducted on Australian soil, a spokeswoman at the Department of Foreign Affairs and Trade told Reuters.

“Australia intends to bring the wreckage ashore at Perth and hold it securely for the purposes of the Malaysian investigation,” the spokeswoman said.

The JACC will coordinate communication between all international partners as well as with the families of passengers, many of whom are expected to travel to Perth.

The Malaysian government has come under strong criticism from China, home to more than 150 of the passengers.

Relatives of the missing have accused the government of “delays and deception”.

Today, dozens of angry relatives of Chinese passengers from Beijing met Chinese embassy officials in Kuala Lumpur, piling more pressure on the Malaysian government over its handling of the case.

“We arrived here this morning with sorrow and anxiety, because the special envoy from Malaysia, the so-called high-level tech team, did not give us any effective information in meetings that took place in three consecutive days,” said Jiang Hui, a relative of one of the victims.

“We want the Malaysian government to apologise for giving out confusing information in the past week, which caused the delay in the search and rescue effort.”