Casey Laulala will offer plenty for Munster in attack

The way Munster roared to victory over Perpignan last week with an injury-time try embodied all that is good about the southern side.

Their never-say-die attitude has gotten them out of many holes in the past and last weekend’s win showed that their fighting spirit is as alive as it ever was.

Two weeks ago they demolished Perpignan playing off-the-cuff, cavalier and brilliant rugby, throwing the ball around like the Baa-Baas.

Meld that attitude and that creativity and keep it consistent throughout the season and Munster can challenge for silverware in both the Heineken Cup and PRO12.

This week head coach Rob Penney has rung the changes, with 12 different faces in the starting XV to face Scarlets at Musgrave Park.

But the Munster team for this outing has a really exciting feel to it and inspires confidence.

Denis Hurley supplies solidity at fullback, while Casey Laulala, Andrew Conway and JJ Hanrahan are all dangerous attackers in the backline. Gerhard van den Heever makes his home debut on the wing.

Up front, Munster have Tommy O’Donnell back to start at openside flanker for the first time in three months. He’s alongside Dave O’Callaghan and the highly impressive CJ Stander in the back row.

While in the front five, BJ Botha and Billy Holland form a strong heart to the side.

An RTÉ reader, jonnyg, commented on my preview of the PRO12 yesterday that the league is predictable until the play-offs. A very brash statement, but Scarlets will come to Cork with a very real chance of defeating the home side.

With Liam Williams (No 14), Aled Thomas (No 10), Rhodri Williams (No 9), Jacobie Adriaanse (No 3) and John Barclay (No 7) all named to start for the Welsh region, they have plenty of talent.

They suffered a home reverse to one of the best teams in Europe, ASM Clermont Auvergne, last week in the Heineken Cup, but they did breach Clermont’s try line and on their day can play excellent rugby.

When Scarlets go wide, and keep the ball alive with multiple plays and passes, they are as dangerous as anyone. But their scrum and fringe defence can be weak and often lets them down at crucial moments.

It’s in those areas Munster will look to capitalise and punish their Welsh foe.

Against Perpignan, Munster were excellent at pummeling the fringe and beating defenders. They will repeat that technique against Scarlets.

If they dominate the scrum, use their wide men at the right moments, and keep the error count low, they’ll win this one.

Verdict: Munster to win by ten. 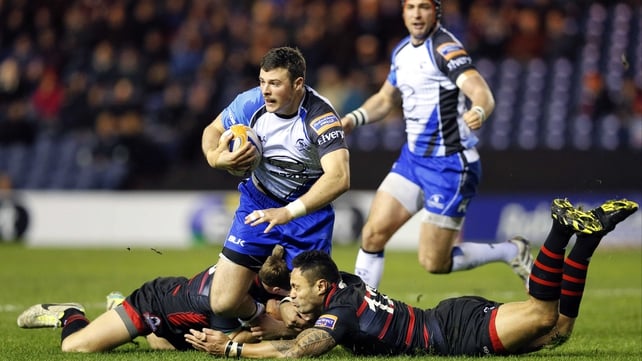 Connacht’s win over Toulouse in the south of France ranks right up there as one of the great victories of Irish rugby: a David versus Goliath on the turf.

They came short in the return tie against the aristocrats of European rugby, but the confidence gleaned from that first win will not be forgotten quickly. I believe they will use it to gain more victories of note over the coming months.

Under Pat Lam they have begun to grow into a side with a very exciting game to watch, backed up by solidity in the tough-as-nails need only apply areas of the pitch.

A home tie against Newport Gwent Dragons is one that the Westerners should win.

While Dragons are very solid this season, with four wins from nine, they only have one win away from home since last February, and that shaky travelling form must be punished by Connacht.

The Welsh side got thumped 32-13 away to Bordeaux-Begles in the Amlin Challenge Cup last week and won’t be spilling over with confidence following that reverse, another plus for Connacht.

Danger men for Dragons include Ross Wardle and Hallam Amos, while Jason Tovey and Richie Rees are a very reliable half-back pairing.

All in all I would back the Connacht backs to get the better of their opposite line, if they get enough possession, that is.

That’s where the experience of John Muldoon and Craig Clarke, backed up by the dynamism of Jake Heenan and Eoin McKeon comes in. If they control Toby Faletau and Andrew Coombs, then Dragons might struggle to get the platform they need.

It should be a close and entertaining match, which Connacht will sneak the win in.

Verdict: Connacht to win by three.