Leinster take on the Ospreys needing only one point to secure their passage into the next round but they will probably get more than that in front of their home crowd and against a side with little to play for (8pm, live on RTÉ 2fm).

Unfortunately, and despite last week’s heroics in France, Leinster’s chance of getting a top-four seeding and a home quarter-final has gone.

The French trio of Toulon, Clermont and Toulouse are likely to secure three of those top places, with Ulster or Leicester set to claim the fourth depending on the outcome of their clash in Welford Road on Saturday evening.

Anything but a defeat by more than seven points will likely see Leinster face a trip to take one of those French heavyweights in the last eight – with a trip to Toulouse arguably the preferred option out of those possibilities.

In any event, Leinster are unlikely to slip up at home against an Ospreys side that has mustered only a single win in five games so far in this campaign, even given the visitors’ strong track record, and the strength of their travelling squad.

It will not be plain sailing. The Welsh region have picked a particularly good starting pack, with Adam Jones a formidable scrum cornerstone, and the likes of Richard Hibbard, Alun Wyn Jones, Ian Evans and Justin Tipuric capable of giving Leinster plenty to think about.

Behind the scrum, the Ospreys are missing some of their better players but have key man Dan Biggar in situ at out-half, while Tipuric is capable of creating numbers mis-matches and speeding up the play in the wide channels. 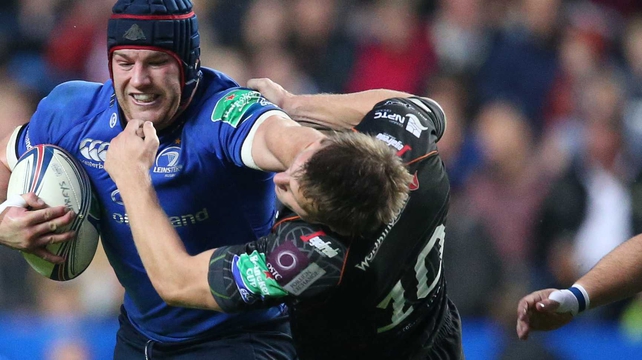 On the Leinster side, coping with a short turnaround after playing on Sunday afternoon is the major issue for Matt O’Connor and his coaching team.

Four changes have been made to freshen up the pack after last week’s heroics with only Sean Cronin, Devin Toner, Mike McCarthy and the ultra-durable Jamie Heaslip being asked for another shift as starters.

The quality of the replacements, and the sense that there is healthy competition for places, is a big positive.

That is particularly the case in the front row, where Cian Healy’s return to the starting XV is a major boost after his all-action cameo against Castres and should help Leinster manage the threat of an Osprey scrum that has proved very troublesome in the past.

On the other side of the scrum, Martin Moore has a huge opportunity to confirm the impression that he is ready for further advancement at international level.

Leinster are unchanged in the backline, with Jimmy Gopperth getting a deserved opportunity to stake a claim for the number one spot in the out-half pecking order. On home soil, and against a relatively weak Ospreys unit, the creative talent may turn out to be the decisive difference.

Overall, the sense is of a team that is developing nicely after some mediocre performances earlier in the year, with the signing of Sean O’Brien and Richardt Strauss’s return to the bench after his heart problem add to that sense of a team growing in strength.

Leinster’s last brilliant away victory was followed by a shock defeat a week later, and the short turnaround does increase the chance of a flat performance. But they should be able to feed off the energy of the home crowd, and with a clear edge in the backline and on the bench, can ensure that the pattern is not repeated.