O’Dwyer the Tipp hero in thriller

Home/Sport/O’Dwyer the Tipp hero in thriller
Previous Next

O’Dwyer the Tipp hero in thriller John O’Dwyer and William Egan battle for the sliotar

John O’Dwyer was the hero of the hour for the Premier County in front of 6,615 spectators at Semple Stadium.

The Killenaule hitman hit 1-07 for Tipp, who have set up a semi-final meeting with Clare in three weeks time.

This was a quite remarkable game as Division 1B winners Cork recovered from the concession of 2-04 within the opening eight minutes to make a real game of it.

By half-time, the Rebels were 3-11 to 3-09 in front but they fell six points behind during the course of a topsy-turvy second half.

Patrick Horgan’s late goal provided a glimmer of hope for Cork and they could even have snatched a draw at the death when Anthony Nash saw a blistering 20m free blocked by the massed ranks on the Tipperary goal-line.

In the first half, Nash had scored from a similar effort with an unstoppable shot unleashed from no more than 12 yards out. 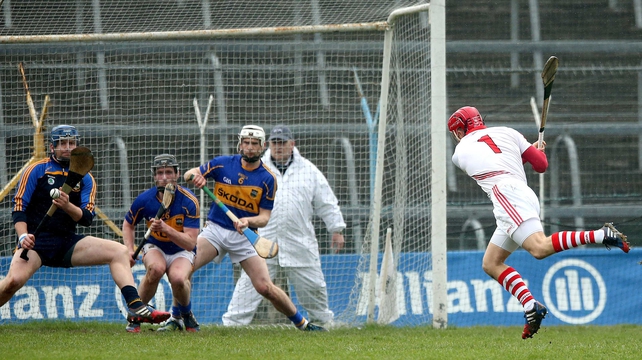 It was a quite remarkable game but far too open for both sides from a defensive context, as 51 scores were amassed over the course of 70 minutes.

O’Dwyer was the undoubted star turn but Seamus Callanan took his League tally to 5-40 with a haul of 0-08.

Patrick Horgan helped himself to 1-08 for Cork, without ever hitting the heights he is truly capable of, and Seamus Harnedy collected a brace of first-half goals.

Tipp had edged into the last eight with a three-point victory over Dublin in Thurles seven days ago and with the threat of relegation removed, there was a feeling of freedom to some of their play.

That was especially reflected in the opening eight minutes as Tipp romped into a ten-point lead, with goals coming from Denis Maher (36 seconds) and Niall O’Meara in the seventh minute, before depleted Cork finally found their feet.

Harnedy bagged two goals within the space of three minutes to bring the Leesiders right back into contention but O’Dwyer hit back for Tipp three minutes before the break with his goal.

There was still time for a sixth goal of the opening half and it went to Cork, as Nash came forward to rattle home a magnificent free. 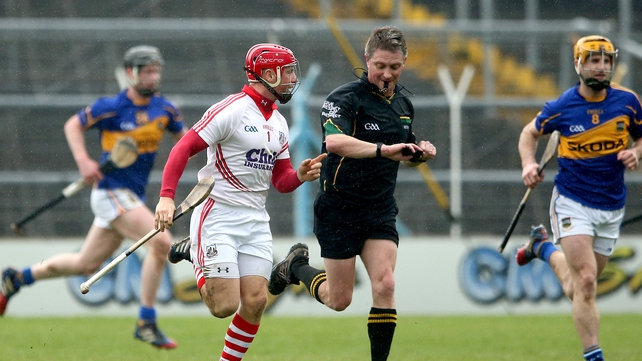 A brace of Horgan points before half-time handed Cork the initiative but after the sides were level twice early in the second half, Tipp went on to establish a 3-21 to 3-15 lead.

Cork were handed a lifeline in the 65th minute when Horgan pounced for his side’s fourth goal following an error by Tipp goalkeeper Darragh Egan.

Horgan’s goal was reminiscent of his 2013 All-Ireland semi-final effort when he capitalised on Dublin goalkeeper Gary Maguire’s mistake.

But although Cork got back to within a point of the hosts in the final minute, points from Noel McGrath and that man O’Dwyer made the game safe for Tipp.

Nash stepped forward in an attempt to salvage a draw for Cork in the fourth minute of stoppage time but he was denied on this occasion.