Home/Sport/O’Byrne Cup round-up: Dubs off to winning start
Previous Next Dublin, Kildare, Longford, Wexford, Offaly, Meath and Wicklow claimed wins in the opening round of the Bord na Móna O’Byrne Cup this afternoon.

All-Ireland champions Dublin were slender 0-12 to 0-11 winners over Westmeath at Cusack Park, Mullingar.

Late scores from Eric Lowndes and Ciaran Kilkenny ensured Jim Gavin’s charges got 2014 off to a winning start.

Westmeath moved 0-09 to 0-08 ahead on the restart, but Dublin fought back to carve out a one-point win. 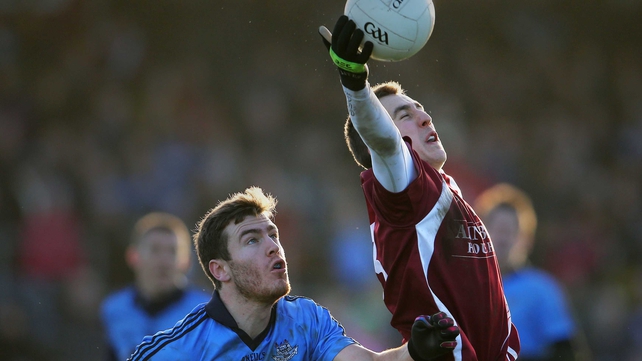 In Group B, reigning O’Byrne Cup champions Kildare had a comfortable 4-24 to 0-12 win over Athlone IT at St Conleth’s Park, Newbridge.

Goals from Eoghan O’Flaherty and Adam Tyrell helped the Lilywhites to a 2-14 to 0-03 interval lead, in an opening half which took 25 minute for AIT to open their account.

Jason Ryan’s charges were fully on top in this game, with O’Flaherty and Padraig Fogarty adding further goals in the second half.

Longford were hugely impressive in their 1-19 to 2-07 win over Carlow at Dr Cullen Park.

Longford stormed to a 1-13 to 0-00 interval lead, with Francie McGee netting the goal for the visitors.

Carlow fought hard on the restart, with goals from Shane McGrath and Seamus Kinsella, but Longford’s strong first-half display ensured they held out for victory.

In Group A, goals in either half from Kevin O’Grady helped Wexford to a comfortable 2-13 to 0-11 win over Laois at a blustery New Ross.

Despite registering eight first-half wides, Wexford were in control at half-time, with a ninth minute O’Grady goal helping them to a 1-07 to 0-06 interval lead.

Laois cut the gap to the minimum inside seven minutes of the restart, but Wexford added 1-05 without reply, including O’Grady’s second goal.

Emmet McDonnell’s second season as Offaly manager got off to a winning start, with a slender 0-13 to 0-12 win over UCD at O’Connor Park, Tullamore.

Offaly led by 0-10 to 0-05 at half-time, with Niall McNamee and Johnny Maloney among the Faithful County scorers.

The Students launched a strong comeback on the restart, with the sides tied with ten minutes remaining, but Offaly finished strongly.

In Group C goals were key as Meath claimed a 4-11 to 1-14 win over DIT at Páirc Tailteann.

Mickey Newman and Dalton McDonagh both raised green flags in the opening half as Meath took a 2-6 to 0-06 interval lead.

Wind-assisted DIT worked hard to cut the gap on the restart, with a Niall Scully score leaving four points between the sides.

David Larkin completed the Royals’ hat-trick soon after, and although Scully buried a penalty for DIT, Meath finished strongest with McDonagh netting his side’s fourth goal late on.

Wicklow were made work hard, before registering a 1-09 to 0-11 win over IT Carlow in Ashford.

Wicklow continued to edge the lead throughout the second half, and a late point proved crucial for the hosts.