Dublin and Gary Sweeney had to work hard for their victory

All-Ireland Champions Dublin were rattled by Louth, while there were wins also for DCU, Kildare, Athlone IT, Wicklow, Meath, Laois and UCD in the second round of the Bord na Móna O’Byrne Cup on Wednesday.

A brace of second half goals from substitute Daniel Watson helped Dublin to a 2-06 to 0-08 win over Louth at Parnell Park.

Scores were at a premium in the first half of this game, with the deadlock broken after 14 minutes, when Jason Whelan opened the hosts account.

Amazingly Jim Gavin’s side weren’t to score again until the second half, as Louth registered a trio of points before the break.

Dublin had Darragh Nelson black carded in the 43rd minute, but substitute Watson bagged 2-01 late on to help the hosts to a four-point win.

DCU also claimed their second win of the competition, after a hard earned 2-15 to 2-09 win over Westmeath at St Loman’s, Mullingar.

First half goals from Conor McGraynor and Patrick Fox helped the students take a 2-06 to 0-07 interval advantage.

Westmeath bounced back with green flags from Paul Sharry and substitute Dessie Dolan in the second half, but DCU held out for victory.

O’Carroll bagged two points within four minutes of his introduction, in a game where Laois finished strongly. 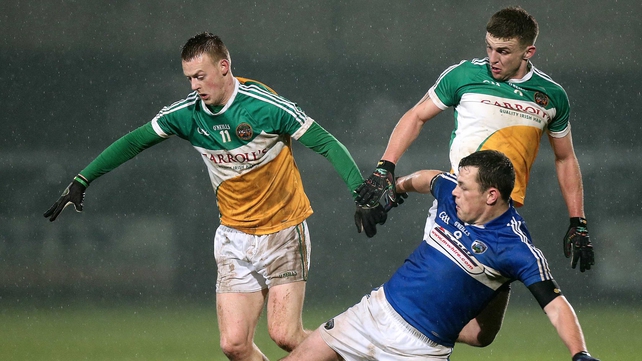 The hosts led by 2-06 to 1-07 at half-time, with Conor Meredith and Martin Scully registering the O’Moore’s goals, while Ciarán Hurley netted for Offaly.

The visitors took the lead on the restart, but Laois finished strongly with six unanswered points.

Reigning O’Byrne Cup champions Kildare continued to show a ruthless streak as they followed up their impressive 24-point win over Athlone IT, with a 3-20 to 0-06 victory over Longford at Newtowncashel.

A Padraig Fogarty goal helped Kildare to a 1-11 to 0-02 interval lead, with Mikey Conway and Darroch Mulhall adding further goals on the restart.

The home side led by 0-10 to 1-05 at half-time, but the students held them to three points on the restart.

Wicklow held out for a hard earned 1-21 to 3-13 win over DIT in Newtownmountkennedy.

The sides were tied 0-13 to 2-07 at half-time, with DIT bagging their third goal on the restart.

DIT moved five points clear, but a Brendan Kennedy goal saw Wicklow regain the lead, and they finished strongly to hold out for victory.

Meath continued their impressive start to 2014 with an 0-18 to 0-12 win over IT Carlow at Páirc Tailteann, Navan.

10 players were on target for Mick O’Dowd’s side in this victory, with Donal Lenihan top-scoring with four points for the hosts.

Meath led by 0-10 to 0-07 at half-time, and doubled their advantage by the full-time whistle.

Kildare’s Ross Bergin and Longford’s Liam Connerton netted a goal each in either half, as UCD claimed a 2-12 to 2-03 win over Wexford in Enniscorthy.

The students never looked troubled, despite Ciaran Lyng netting two second half goals for the hosts.