Despite the impact of COVID-19, modern EV’s sales have increased by 168 per cent this year, according to EV-Volumes. Newcomers to the world of electric vehicles are often taken aback by how quickly they can accelerate. But how do they compare to combustion engine vehicles?

CarMoney’s car finance experts compared the acceleration times of electric vehicles to some of today’s most iconic and fastest ICE cars, as well as all previous top speed record holders, to highlight just how far EV technology has progressed.

Experts compared the acceleration times of electric vehicles to the quickest automobiles of all time, particularly those that broke the top speed record, in order to get a true idea of how fast they are. 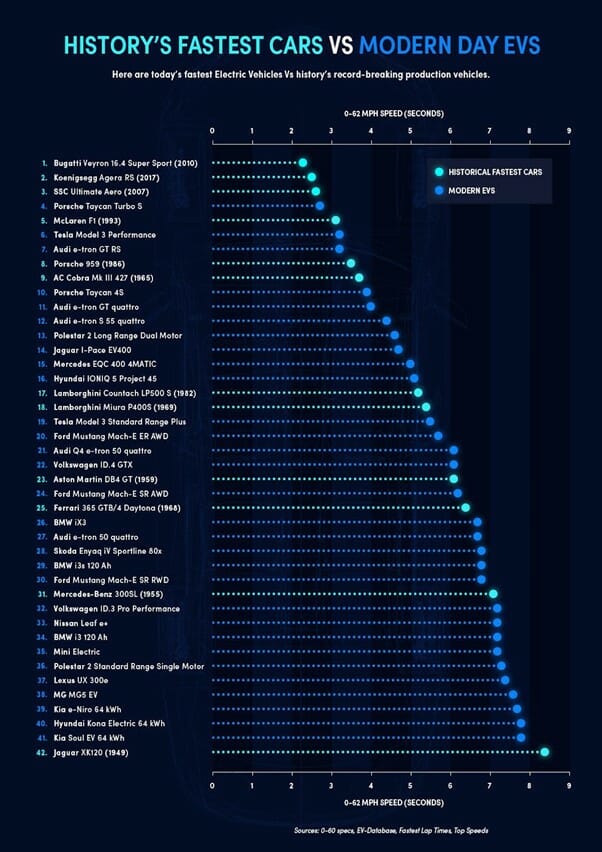 The graph above compares the 0-62 mph times of all the vehicles that have held the top speed record for a production car throughout history with the 0-62 mph times of today’s electric vehicles. Many reasonably priced cars are now capable of outrunning their former record-holders off the line. 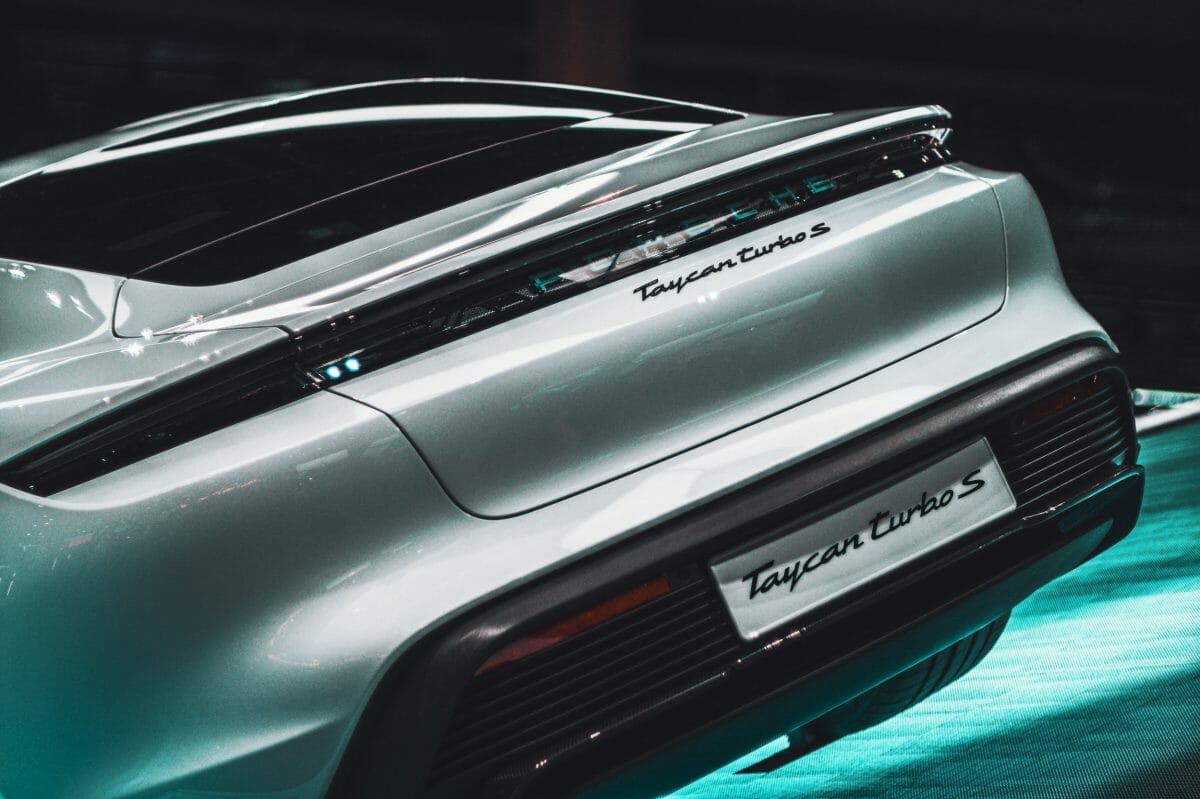 It is, however, faster than the McLaren F1, which held the top speed record in 1993, despite being somewhat slower than the three most recent holders of the production car top speed record. The Porsche is less expensive, which is the most shocking aspect of this. The Taycan costs £1.6 million less than the Veyron did when it was first produced, making its 2.6-second speed all the more astounding.

Scrolling down the graphic, the stats get more surprising. The stunning new Hyundai IONIQ 5 Project 45 is a revolutionary hatchback, which is suitable for families and offers luxury and leisure. It can reach 62mph faster than a Lamborghini Countach, which was the world’s fastest automobile in 1982.

The graph also depicts how far EVs progressed in general. The Jaguar XK120 was the world’s fastest car in 1949, with a top speed of 125 mph and a 0-62 mph time of 8.5 seconds. By today’s EV standards, this time can be smashed by cars of various kinds and sizes, something that would not be possible with ICEs. The Kia Soul EV, Hyundai Kona Electric, MG’s MG5 EV, MINI Electric, and even the Nissan Leaf e+, for example, all have sub-eight-second acceleration times.

Experts also put into test some of the fastest and most iconic sports cars and the modern era to see how they will match up against the EV market by 2023. 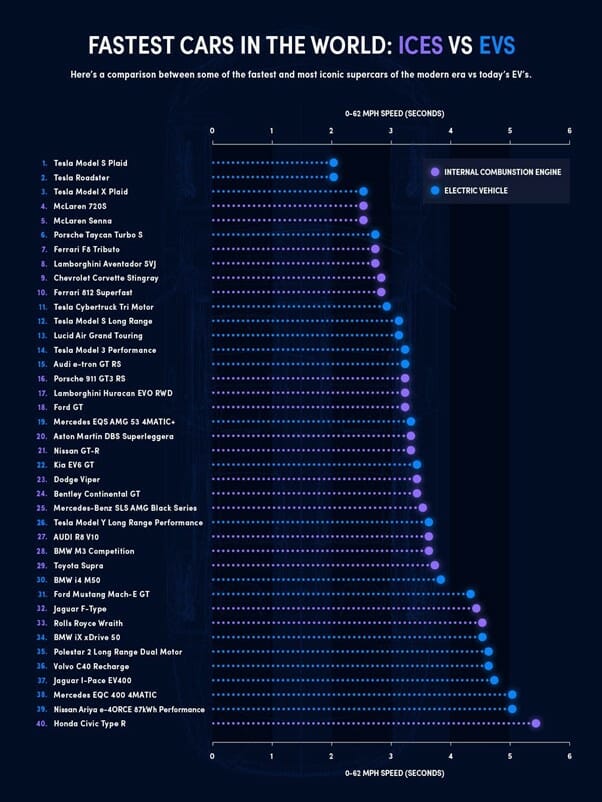 Tesla appears to be on the verge of dominating the roads when it comes to the fastest cars from 0-62 mph. Tesla will not only be on top of the 0-62 timesheets by 2023, but they will also be competing against themselves. Their new Model S Plaid and Roadster models, due in 2022 and 2023, will both be extremely speedy off the line, with 0-62 timings of 2.1 seconds for the Model S Plaid and 2.6 seconds for the Model X Plain, respectively. 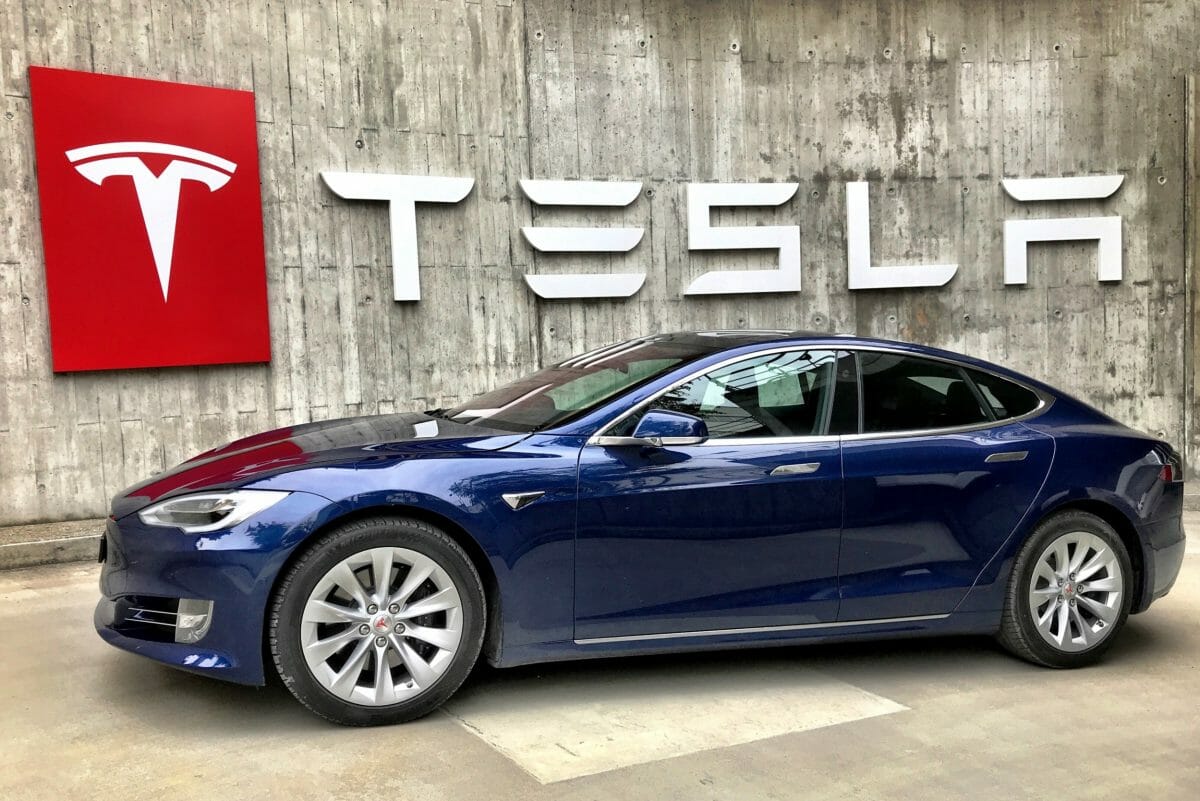 These are astonishingly fast times, especially when compared to other renowned cars of the modern era. Tesla’s new Roadster will be half a second faster than both the McLaren 720S and Senna models, and more than a second faster than the Lamborghini Haracan, one of the most popular supercars on the market.

Even more surprising, Tesla can produce similar performance out of a truck. Their world-famous Cybertruck, which is set to arrive in 2023, can’t quite keep up with the new Roaster, but it still manages a 3.0 second 0-62 time. That’s more than a Porsche 911 GT3 RS can do.

Other key findings include:

• The Hyundai IONIQ 5 Project 45 has a quicker 0-62 than both the Lamborghini Countach LP500 S and Miura P400S
• Mercedes’ new EQS AMG 53 4MATIC+ matches Nissan GT-Racceleration and beats Aston Martin DBS Superleggera
• Kia’s new model EV6 GT, priced at around £58,295 and records a time of 3,5 seconds, which is the same as of the £157,900 Bentley Continental GT and 0.1 of a second quicker than the £229,935 Mercedes-Benz SLS AMG Black Series
• Porsche Taycan Turbo S costs £140,000 and matches other competitors’ elite line of ICE supercars, such as Ferrari’s F8 Tributo priced at £203,586 and Lamborghini’s ever-popular Aventador SVJ, which is around two and half time as expensive at £360,000

The speeds that electric vehicles are capable of are truly incredible. And, as more cars are produced utilising electricity and the technology that supports it, supercar makers will soon find that their cars are being matched off the line by family saloons costing a fifth of the price.