Paul McGinley shot a four-under 68 in his opening round

McGinley carded a four-under-par 68 on Thursday to finish one shot off the lead shared by England’s Matthew Baldwin, France’s Romain Wattel and Spain’s Rafael Cabrera-Bello.

The 47-year-old Dubliner admitted the first half of last year following his appointment as captain was a “write-off” in terms of his own golf, but he finished the season strongly and began 2014 in the same fashion.

“I prefer to play rather than practice in the winter and the members at Sunningdale, including Tim Henman, have been keeping me sharp with their money games,” said McGinley, who chipped in to rescue a bogey on the 16th after finding water with his second shot.

“I played well in the second half of last season, made all the cuts and didn’t have any big finishes but I played a lot of good golf and obviously continued today.

“I’m disappointed with the last. There was a scuff mark right in my line and I let it affect my stroke. It was reminiscent on Bernhard Langer at Kiawah Island (who missed a putt to retain the Ryder Cup in 1991). I didn’t hit a good stroke because of the scuff mark, a bit of a mental error.”

Michael Hoey finished his round on three under after a 69, Damien McGrane and Rory McIlroy both shot 70s.

Padraig Harrington and Simon Thornton are both a shot further down the field, Kevin Phelan is on level par after his 72, while Gareth Maybin and Peter Lawrie are one over.

McGinley outshone playing partners and potential Gleneagles team members Tommy Fleetwood and Thorbjorn Olesen – who carded rounds of 73 and 74 respectively – but is relishing the opportunity to compete alongside some of Europe’s rising stars.

“That’s a big thing for me to do,” he added. “Both of them could be on the team. The more information I get, the better. I’ve played with Tommy three or four times now and that’s great. Should he make the team I feel I’m better prepared to manage him and the same with Thorbjorn.”

McGinley admitted he knows more than enough about the likes of McIlroy, Luke Donald and Sergio Garcia, but will nevertheless have been delighted to hear McIlroy’s reaction to his opening 70.

The former world number one, who ended a miserable 2013 with victory in the Australian Open, carded two birdies and no bogeys and was delighted with his long game. 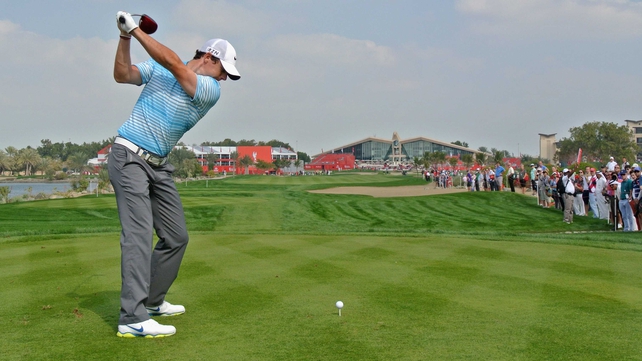 “I played well and was very happy with how I hit the ball from tee to green,” said McIlroy, who has reaped the benefits of twice-daily gym sessions in Dubai following his engagement to tennis star Caroline Wozniacki in Sydney on New Year’s Eve.

“I hit it long and straight and just did not take advantage of some of the opportunities, especially on the last two holes. It definitely could have been a bit better but it’s a solid start and I was pleased.

“It’s the best I’ve driven it in a long time. That’s huge, it’s the foundation of my game. If I drive the ball well, I play well and my results are good.

“If you miss fairways here you get penalised heavily, so if you’re hitting it long and straight off the tee, it’s a huge advantage. The rough is very thick and really penal and if you miss the fairways, you’re making life very hard for yourself.”

Joint leader Baldwin achieved his best finish on the European Tour by finishing second in the Nelson Mandela Championship in December and said: “It’s given me confidence to go on and hopefully keep challenging and maybe a win is around the corner.”