By Richard Cowan and Bernie Woodall 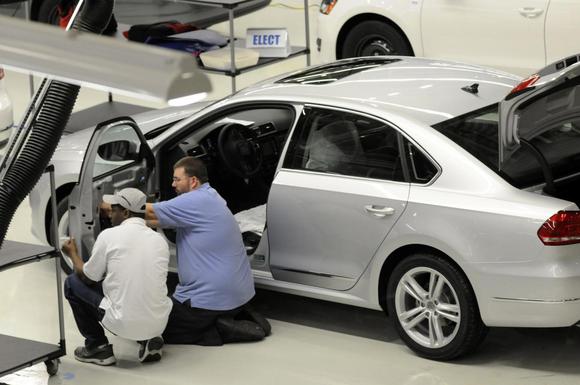 Volkswagen employees inspect a VW 2012 Passat in the assembly finish department in Chattanooga Tennessee in this December 1, 2011 file photo.

Obama’s comments, made at a closed-door meeting of Democratic lawmakers in Maryland, came as the vote to allow union representation at the Chattanooga plant drew to a close.

The vote will have wide-reaching implications for the auto industry in the South, where all foreign-owned vehicle assembly plants employ nonunion labor, and for the United Auto Workers union, which could use a victory to reverse a decades-long downward spiral.

The vote has faced fierce resistance from local Republican politicians and national conservative groups who have warned that a UAW victory could hurt economic growth in Tennessee. While voting was under way on Wednesday, Republican U.S. Senator Bob Corker said VW could announce new investment in the plant if the UAW lost the secret ballot.

Corker faced immediate accusations of trying to unfairly influence the vote. “Never before have Republicans tried to intervene as they have down here in Tennessee and to threaten workers the way they’ve done,” UAW President Bob King told Reuters.

Corker defended his statement as “true and factual” in an interview with Reuters, despite Frank Fischer, chief executive of VW Chattanooga, saying that there was “no connection” between the vote and the possible investment.

Legal experts see a difficult path if either side wants to challenge the vote, though, given broad free speech protection for U.S. Senators, which would make it difficult to involve Corker in a dispute, and, from the anti-union side, management’s friendliness with the UAW.

Obama’s interjection in the war of words on Friday, albeit behind closed doors, underscored how much is at stake in the three-day vote by VW’s 1,550 hourly workers. The vote is due to end at 8:30 p.m. EST (0130 GMT Saturday) and the results could be announced soon after that.

Obama said everyone was in favor of the UAW representing Volkswagen except for local politicians who “are more concerned about German shareholders than American workers,” according to a Democratic aide who attended the meeting with Democratic lawmakers in the House of Representatives.

Voting turnout was heaviest on Wednesday, according to local workers, with an estimated 1,000 employees casting ballots. On Friday, when the plant normally is shut down for weekly maintenance, many of the maintenance workers were expected to cast their paper ballots, all of which will be counted individually after the vote closes.

For the UAW, whose U.S. membership has plummeted by 75 percent since 1979, a win could open the door to organizing other foreign-owned auto plants in the U.S. South, the cornerstone of UAW President Bob King’s strategy.

A loss could accelerate the decline in membership, now at just under 400,000 from a peak of 1.5 million. It also would reinforce the widely held notion that the UAW cannot make significant inroads in a region that historically has been steadfastly anti-union. Virtually every state in the U.S. South has passed right-to-work legislation that gives workers the choice of joining a union and paying union dues.

For VW, the stakes also are high. The German automaker invested $ 1 billion in the Chattanooga plant, which began building Passat mid-size sedans in April 2011, after being awarded more than $ 577 million in state and local incentives.

VW executives have said a new seven-passenger crossover vehicle, due in 2016 and known internally as CrossBlue, could be built at either Chattanooga or Mexico.

VW executives also have said that the bulk of the $ 7 billion that the company is investing in North America over the next four years is targeted for Mexico, including a new $ 1.3 billion Audi assembly plant.

Over the past week, however, several Republican politicians from Tennessee have added their voices to the growing anti-union chorus, implying that further subsidies to attract additional VW investment in Chattanooga could be threatened by a UAW victory.

Prodded by IG Metall, the powerful German union that has several representatives on VW’s supervisory board, the company has maintained what it calls a “neutral” stance toward the union, although the company agreed to permit UAW representatives into the plant to address workers.

“The relationship between the UAW and IG Metall has been critical in our organizing efforts,” the UAW’s King said, adding that the two were already working together at a second southern U.S. plant, in Alabama, owned by Daimler AG.