Leinster back top of Pro12 with win in Cardiff

Leinster back top of Pro12 with win in Cardiff Zane Kirchner is brought to ground by two Blues tacklers

Defending champions Leinster moved back to the top of the RaboDirect PRO12 table with their sixth successive victory over Cardiff.

The visitors race into a 14-0 lead after only 17 minutes and it looked ominous for the Welsh region, but they passed the ball about without inhibition from then on and played their part in an entertaining encounter for a crowd of barely 5,000.

Leinster ran in four tries, through Jack Conan, Richardt Strauss, Michael Bent and Eoin Reddan, to the hosts’ three, with Jimmy Gopperth finishing with 14 points thanks to two penalties and four conversions.

Having lost only once in their last 14 meetings with the Welsh region, Leinster fielded a completely new pack from that which destroyed the Catalans Dragons’ scrum last weekend.

And the newcomers were confident enough to opt for a second scrum when the Blues were penalised at the game’s first set piece.

When the ball ran loose number eight Conan picked up and stretched over to the satisfaction of the TMO. Gopperth converted.

Nippy Leinster scrum-half Reddan was held up beneath the posts, but the Irish spread the ball left and hooker Strauss, back from injury, crossed by the flag. Gopperth converted superbly.

But the Blues hit back, with fly-half Gareth Davies jinking through to touch down under the posts for a try reminiscent of his winning score in October’s Heineken Cup victory over Toulon. He also added the easy conversion.

With centre Isaia Tuifua repeatedly breaking the first line of Leinster defenders, the Welsh region began to pose a few problems, but they slipped further behind when Gopperth slotted over a penalty. 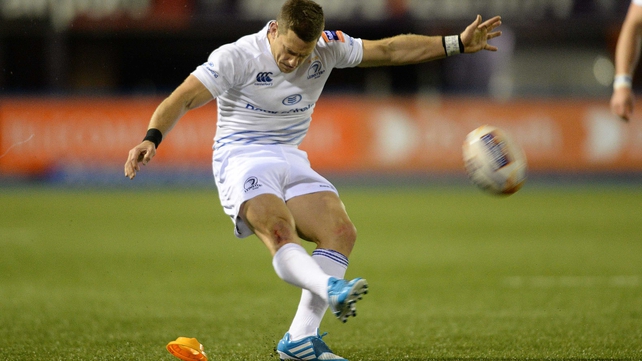 The Blues should have responded immediately when their Irish number eight, Robin Copeland, burst clear, but he ignored two men outside him to go on his own and was hauled down.

But the home team still managed another try before the interval.

Leinster lock Tom Denton was yellow-carded, Davies put the resulting penalty into touch and the Blues eight, growing in self-belief, drove over for hooker Kristian Dacey to claim his fifth score of the season.

Davies opened the second period with a penalty to cut the gap to two points, but Gopperth replied with a low effort which skidded over off the bar.

And the former Newcastle man had no trouble converting after Leinster prop Michael Bent dived over from close range.

The Irish clinched their bonus point when Reddan trotted over unhindered. Gopperth again added the extras.

The Blues would not lie down and lively full-back Dan Fish celebrated a new contract with a deserved try, improved by Davies, but there was to be no further scoring.