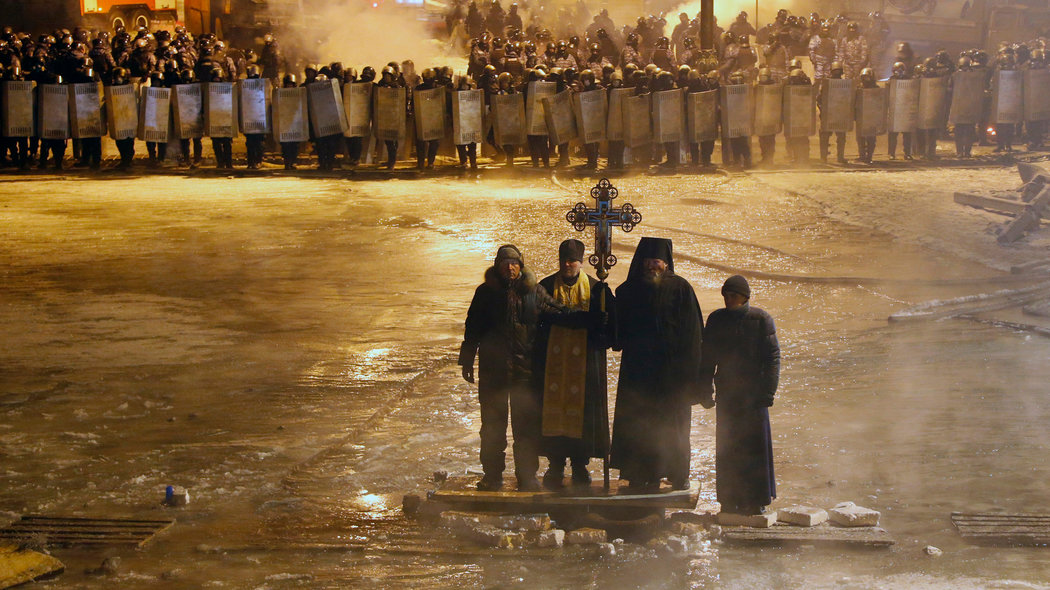 Orthodox priests pray as they stand between protesters and the police in Kiev early Friday. Sergei Grits/Associated Press

KIEV, Ukraine â With President Viktor F. Yanukovych and antigovernment demonstrators at an impasse here, a cease-fire disintegrated on Friday night as the Ukrainian capital convulsed in renewed violence and fire bombs lit up the night sky.

Earlier on Friday, civil unrest spread across the country as protesters laid siege to government buildings in at least nine other cities â occupying some and thronging outside others.

The widening turmoil, in the central Ukrainian cities of Khmelnitsky, Zhytomyr and Cherkasy, as well as in the western strongholds of Lviv, Ternopil, Ivano-Frankivsk, Lutsk, Rivne and Chernivtsi, showed that the authorities, including the elite Berkut riot police and Interior Ministry troops, were outnumbered and at risk of being spread too thin.

Officials say there are 3,000 to 4,000 specially trained Berkut officers, and an additional 8,000 to 9,000 Interior Ministry troops, deployed across the country. Throughout the now two-month uprising, there have often been many more protesters than that on the streets of Kiev. And some officers, particularly in the west, are believed to side with the opposition. 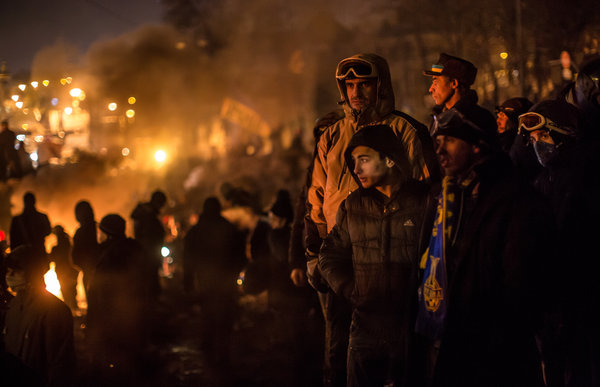 Antigovernment protesters near a soccer stadium in Kiev on Friday. Brendan Hoffman/Getty Images

In Kiev, efforts to defuse the crisis suffered a major setback as the police fired rubber bullets at protesters near the Dynamo soccer stadium shortly after 10:30 p.m. on Friday, while demonstrators hurled stones, firebombs and even firecrackers that exploded in a rainbow of colors â at times illuminating the clash with oddly festive plumes of light. 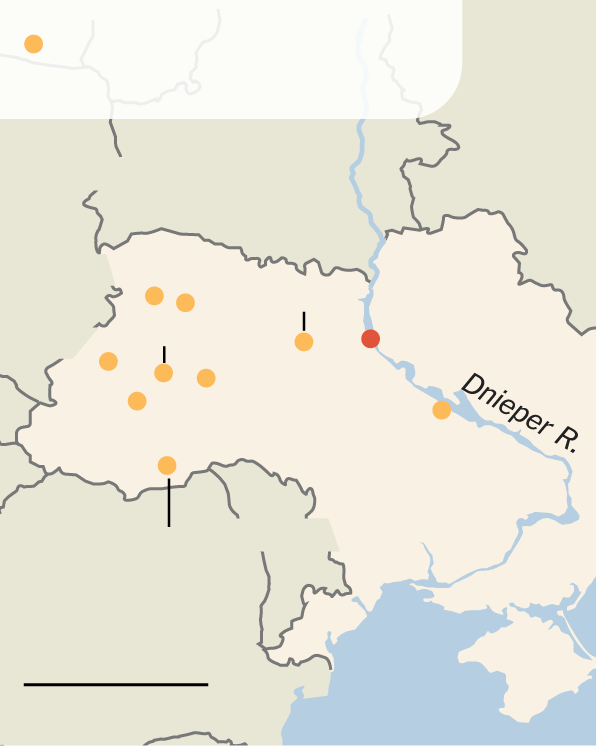 In a scene that veered from primeval to apocalyptic, demonstrators used sticks to hit barrels and sheets of metal, creating a savage drumbeat as a backdrop, while billows of black smoke rose from piles of burning car tires along a barrier made of bags of snow. Fighters raced to the scene carrying more tires and a motley assortment of weaponry, including baseball bats, sticks and pipes.

During a meeting with religious leaders in Kiev earlier in the day, Mr. Yanukovych had vowed to restore stability and expressed frustration that opposition leaders seemed unable to exert much influence over protesters who had clashed with the police this week. âI will do everything to stop this conflict, to stop violence and establish stability â certainly to stop radicals,â Mr. Yanukovych said during the meeting, according to a statement released by his office. âIf we manage to stop them amicably, we will stop them amicably. Otherwise we will use all legal methods.â 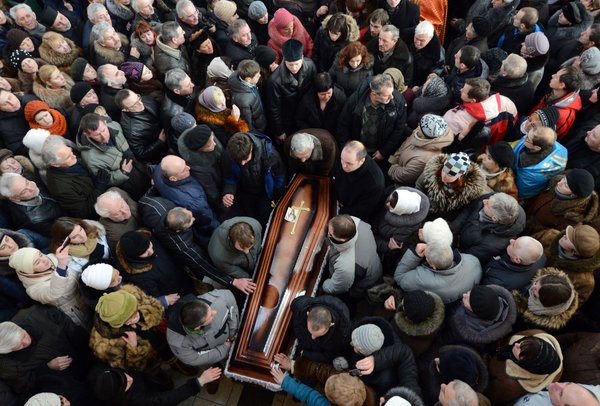 He added: âOpposition leaders have no more influence on these processes. Radicals are not going to stop. They keep on crushing, burning and destroying? What to expect? For how long can we wait?â

Mr. Yanukovych on Friday reiterated his offer of minimal concessions, which he described to opposition leaders during talks on Thursday night, and which they and demonstrators made clear they viewed as insufficient.

Mr. Yanukovych said that all detained demonstrators not accused of serious crimes would be granted amnesty and released. He also said that he would consider a reorganization of the appointed government and that Parliament, at a special session on Tuesday, would consider changes to a package of legislation that his supporters rammed through last week and that broadly suppresses political dissent as well as free speech and assembly rights.

The opposition has been demanding the repeal of the legislation. Many also want Mr. Yanukovych to resign â which he has said he would not do â while others are insisting that the government be dismissed, including Prime Minister Mykola Azarov.

International concern also mounted on Friday. In Davos, Switzerland, where the World Economic Forum was underway, about 50 supporters of the Ukrainian protest movement, wrapped in yellow and blue flags, urged European governments to freeze the assets of Ukrainian officials and impose sanctions. Some carried placards saying, âThank you for your deep concern; now do something.â