Seán Greenwood gets his Olympic campaign underway on Friday

Friday sees two more Irish athletes in action at the Winter Olympics in Sochi as Seán Greenwood gets his skeleton campaign underway while Jan Rossiter will compete in the men’s 15km cross-country ski race.

Greenwood began training with the other skeleton competitors at the Sanki Sliding Centre prior to the opening ceremony.

Having prepared for the games in Germany with his coach Jeff Pain, he immediately set about outperforming his world ranking of 26 and his first day on the course saw him set the 13th fastest time. Training has taken place on a daily basis this week with athletes taking to the ice for two runs each day.

In an event in which the opening five seconds act as the engine for the rest of the run, Greenwood starts have been progressively improving in training with a 4.83 second start on Tuesday – his best so far – and crucially it is in the same league as the leading athletes.

Competition though has been fierce with athletes improving their overall times forcing Greenwood further down the time sheet and Wednesday saw him set the 18th fastest time.

Since skeleton returned to the Winter Olympics in 2002 Ireland has had a presence at each competition. Famously Clifton Wrottesley finished a surprise fourth at the Salt Lake City games, his work inspired the presence of David Connolly in Turin and Pat Shannon in Vancouver.

It has been a long road for Greenwood who only began sliding competitively in 2010 and initially did so without a coach.  However he quickly started to register impressive results culminating in an overall second place finish on the North American circuit last season.

These results allowed him to enter World Cup level events for the crucial run into the Olympics and in December he finished an impressive 17th in the opening world cup race of the season in Calgary.

Any improvement in the Olympics would be a fine reward for the Vancouver native.

The Olympic Skeleton competition is held over four runs with the gold medal going to the athlete with the fastest aggregate time. The event begins Friday with the final two runs on Saturday.

If a result in the teens is a target for Greenwood, Jan Rossiter will have more modest ambitions. 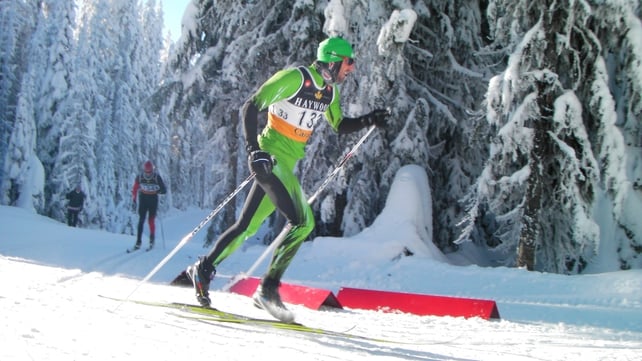 Another resident of Canada, Rossiter will be competing in the men’s 15km cross country ski race at the Laura Cross Country Ski and Biathlon complex a short drive from the Sanki Sliding Centre.

Born in Cork to Irish and Czech parents the 26-year-old is currently based in Ontario.

He has mainly competed in the second tier Nor-Am Cup circuit with a best result this season of 30th place in the 15km race in Canmore, Alberta.

Rossiter’s event will take the form of a time trial with the 112 athletes setting off at 30 second intervals.  The winner will aim to finish in a time under 38 minutes for the 15km course.

The event takes place in the ‘classic style’ meaning that competitors must keep their skis in pre-prepared grooves for most of their time on course.

This is the third games in a row where Ireland will have an entrant in the 15km cross country ski race. Rory Morrish secured an 87th place finish in Turin while four years later in Vancouver PJ Barron was  91st. Rossiter’s goal will be to improve on that and possibly beat Paul O’Connor’s 69th position from the 2002 sprint race. If he does so it will be Ireland’s best ever Olympic cross country ski result.