In his record-breaking 140th Test, Brian O’Driscoll put in a spectacular performance in his final game in an Irish jersey on Irish soil, creating three brilliant tries as the home side secured a comprehensive 46-7 victory over a willing but ultimately weak Italy.

Ireland eventually scored seven as Italy collapsed under an assault that continued from the first whistle to the last. From O’Driscoll’s perspective, the fact that the Irish boosted their chances of claiming the RBS 6 Nations title by running up a decent score is no doubt the most important outcome of the match.

But he would not be human if he did not take some satisfaction from the fact that virtually all of his remarkable skills bar got a final airing with something approaching the full range of flicks, offloads, reverse passes and arcing runs produced over the course of a magical hour.

The first half actually saw O’Driscoll play a key role in tries at both ends of the pitch.

It started with a gem of a try that will make a fitting addition to the highlight reel. Attacking from an Irish lineout inside the Italian 22, O’Driscoll attracted the attention of the entire Italian midfield defence before releasing Jonathan Sexton with a trademark delayed pop.

Gordon D’Arcy’s superb decoy line and Sexton’s own run were also perfectly executed but, as so often before, O’Driscoll’s genius was the key.

Fittingly, the opening five-pointer was fashioned from a skill O’Driscoll has pioneered and perfected.

O’Driscoll’s role in the second try, which resulted from disorganisation in the Irish defence that began when Andrew Trimble turned over a ball in midfield, was more forgettable from his own perspective, though it was greeted rapturously by the Italians.

The Ulster winger seemed to have made up for his error, landing a crashing tackle that caused the ball to pop loose and spin skywards. But as the crowd and some of those on the pitch took stock of the hit, the ball struck the ground and took an Italian bounce, via O’Driscoll’s toe, and into the hands of Leonardo Sarto.

The big winger still had plenty to do and showed strength when powering through Rob Kearney’s tackle and over the try line and cutting infield for the one of very few positives of the day for Italy. 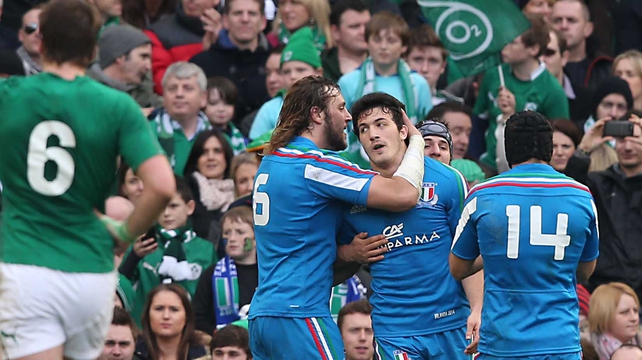 The scores were level again but Ireland simply continued with what was essentially a ruthless softening up exercise.

Italy were struggling to cope, not helped by the early loss of Martin Castrogiovanni, with occasional handling errors stopping Ireland from adding to their total.

The lineout, flawless to date in this competition, also failed to function at key moments as Rory Best’s throw went walkabout at key moments.

But Ireland continued to show flashes of excellence in attack and there was a sense that the floodgates were being readied.

They went close when brilliant interplay between Sexton and Jamie Heaslip saw the hosts go virtually the length of the field and into the Italian 22.

Soon after, quick thinking by Eoin Reddan, introduced early after an injury to Conor Murray, almost produced a try as well.

The scrum-half, who brought his unique brand of urgency to proceedings, spotted that the Italian blindside was unmanned at a scrum and sprinted for the line only to be stopped just caught short.

Italy then prevented the next wave from crossing the whitewash by illegally slowing the ball down on their line. Jonathan Sexton punished that offence by knocking over a penalty to put Ireland back in front on the scoreboard.

That decision to take the points did mean Ireland had decided to batten down the hatches and they ran a penalty soon after, secured on his own 22 metre line by Chris Henry against a fast-wearying Italian pack, soon after.

O’Driscoll’s slipped pass behind his back opened up an avenue into the 22 for Rob Kearney and Ireland capitalised this time, Trimble going over after frantic sequence of play which saw Ireland batter the Italian line. 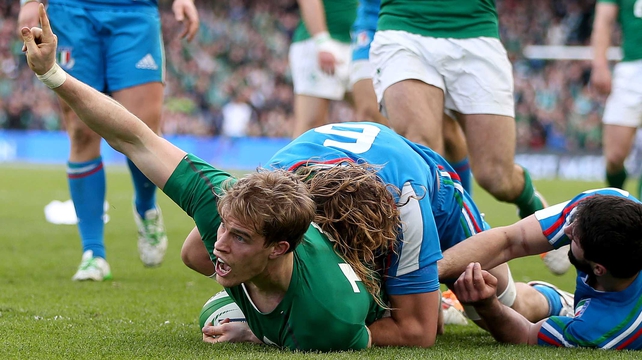 Arguably play should have been stopped by referee Nigel Owens before he did so as Gordon D’Arcy had been receiving treatment in the middle of the Italian defence during that attacking sequence. The presence of medical staff undoubtedly hindered Italy’s efforts to defend.

Italy were not ready to roll over, and began the second half with a bout of barging and pushing which saw Paul O’Connell show off hitherto unseen Brazilian mixed-martial arts skills, executing a tidy escape as two Italians sought to pin him down. 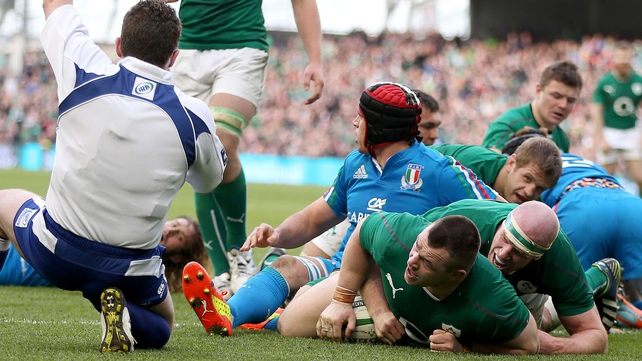 Ireland continued to win the real battle, and as the hour mark approached the high tempo and powerful carrying allowed Cian Healy barge over for Ireland’s third try. Sexton missed the conversion but Ireland were away.

Thoughts had already turned to Paris.

The half sparked into life when O’Driscoll arced across the field in broken play, though this time he was unable to release a team-mate. Worryingly, a heavy hit to the stomach downed the Irish talisman but, as happened against Wales, he was quickly up and back about his business.

There was time for one final spectacular attacking moment – a dummy, a short sprint into space and a sensational offload that gave Ireland a number mis-match down the wide channel which Dave Kearney and Cronin worked nicely to put Sexton over for his second try and Ireland’s fourth.

O’Driscoll left the field to the first of several huge ovations shortly after. To their credit, Ireland were able to ignore the distraction and keep to their task.

Cronin was the right man in the right place for Ireland’s fifth try, getting over in the corner for a try which Paddy Jackson, on for Sexton, converted from a tight angle.

Fergus McFadden, who had replaced O’Driscoll energised Ireland in the final minutes, darting through an exhausted Italian defence for the sixth try. It might have ended there but Ireland could smell blood and with minutes left, Jackson drop-goaled the conversion.

McFadden was again crucial, injecting life into Ireland’s attack with a smart chipping which he had collecting himself to put Ireland within yards of the Italian line. Jack McGrath got over from close range for Ireland’s seventh.

Ireland will not be overly distracted by the outcome on the scoreboard and will hope they can iron out ongoing issues with errors in attack, and fix whatever ailed the lineout.

But that is next week’s work.

The final act of O’Driscoll’s home career in an Irish jersey saw him awarded a fully deserved Man of the Match award.

Cries of ‘one more year’ rang out before the crowd delivered a magical rendition of the ‘Fields of Athenry’ to make it the perfect send-off.

He couldn’t, could he?