Hoops edge battle of the Rovers in Tallaght

Hoops edge battle of the Rovers in Tallaght Shamrock Rovers maintained their unbeaten start to the league when overcoming Sligo Rovers by 1-0 in an entertaining SSE Airtricity League Premier Division encounter at Tallaght Stadium.

The deadlock was broken in the 14th minute when the impressive Ciaran Kilduff raced clear to tee up Ryan Brennan for a facile finish from close range.

The hosts should have doubled their lead after the break with Kilduff and Brennan both going close while Sligo’s best chance fell to Eric Odhiambo, whose goalbound shot was cleared to safety by Conor Kenna in the 74th minute.

The visitors showed admirable attacking intent from the opening whistle and Sean Maguire forced Barry Murphy into a routine save with a first-time shot as early as the second minute.

With neither side enjoying a marked dominance, it was the hosts who next threatened as man of the match Brennan released Kilduff whose low cross was swept away for a corner-kick by Alan Keane.

However, the aforementioned Shamrock Rovers pair were not to be denied five minutes later as Kilduff, released by Simon Madden, once again found space down Sligo’s left flank and his inch-perfect delivery allowed Brennan to tap home from three yards.

The Hoops began to control affairs from that juncture with Conor Robinson and Brennan combining effortlessly in the home engine room and Sean O’Connor was next to try his luck in the 21st minute with a long range shot that veered wide of Garry Rogers’ left-hand upright.

The procession towards the away goal continued as Rogers was called into action two minutes later when repelling a trademark Ronan Finn effort with Kilduff harshly flagged offside as he looked to pounce on the rebound. 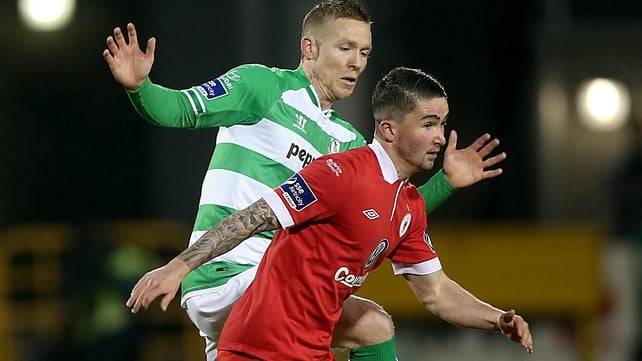 There was little to see from Sligo from an attacking perspective but after Aaron Greene had forced a corner-kick in the 27th minute, Evan McMillan narrowly failed to make a decisive contact from Seamus Conneely’s knock-down.

The visitors derived confidence from that half-chance and Kieran Djilali saw his dipping effort clear Murphy’s crossbar after his initial free-kick had struck the home wall.

Parity should have been restored seven minutes before the break as Sligo spurned two gilt-edged chances in quick succession following Greene’s clever break down the left wing.

The former Shamrock Rovers player produced a sublime cross that eluded the home defence but with the whole goal to aim at, Danny North placed his header too close to Murphy, who cleared before colliding with the upright. 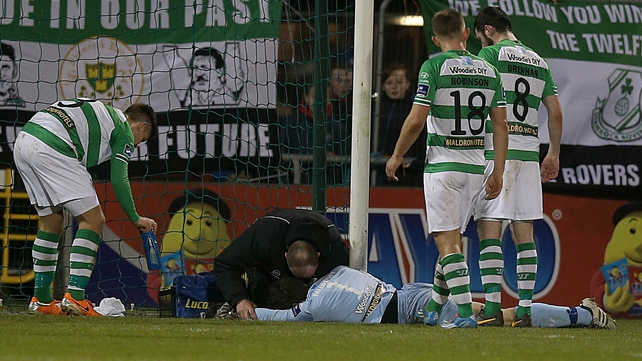 As the hosts field to clear their lines, Maguire fell under a challenge from Conor Kenna but with no penalty kick forthcoming, Conneely fed Eric Odhiambo who lacked composure when shooting over via the crossbar from eight yards.

The interval arrived at the wrong time for the Connacht side, given they had built up a decent head of steam before the break and the hosts regained the initiative upon the restart with Brennan losing sight of the ball as he looked to attack an inviting cross from Finn.

The Hoops should have doubled approaching the hour mark as Kilduff raced clear onto Brennan’s slide-rule pass but Rogers worked wonders in diverting the subsequent shot narrowly past the post.

With Sligo still reeling, Madden escaped Odhiambo’s attentions inside the area but his goalbound effort struck Jeff Henderson before clearing the crossbar.

Given their supremacy, the Dublin side would have been disappointed not to have secured that elusive second goal with O’Connor the next to go close as his low shot fizzed agonisingly wide of the far post.

Trevor Croly’s men continued to threaten and it required a wonderful sprawling save by Rogers in the 71st minute to deny Brennan as he diverted O’Connor’s corner-kick towards the far corner.

From limited possession, the visitors were unfortunate not to restore parity as after Murphy had spilled possession, Kenna cleared from the line to deny Odhiambo after his initial effort had inadvertently been blocked by team-mate Greene.

Sligo’s greater attacking intent ensured space on the counter-attack for the hosts and Kilduff should have made matters safe in injury time when clear on goal but after rounding Rogers, he inexplicably fired wide with the goal at his mercy.