Hammers hit for six as City show no mercy

Hammers hit for six as City show no mercy Alvaro Negredo claimed a hat-trick as Manchester City demolished struggling West Ham 6-0 in the first leg of their Capital One Cup semi-final.

Edin Dzeko grabbed two and Yaya Toure also got on the scoresheet as City all but booked a trip to Wembley by piling on the misery for the Hammers and their under-fire manager Sam Allardyce.

City needed just 12 minutes to take the lead at the Etihad Stadium and the Londoners were simply swept aside in an embarrassingly one-sided match.

Allardyce, who was taunted by visiting fans late in the game, had prioritised the game to some extent by fielding a weakened side against Nottingham Forest in the FA Cup third round last weekend.

But that backfired as they were thrashed by six goals and despite eight changes, including the return of senior players such as Mark Noble, Joe Cole, Guy Demel and Mohamed Diame, it proved a similar story in the Manchester rain.

It was also a particularly chastening debut for Roger Johnson, who looked well off the pace after arriving on loan from Wolves to bolster the defence this week.

With cup football now effectively over, this weekend’s trip to Cardiff in the Premier League is taking on crucial importance for Allardyce.

For City, it was another irresistible display to add to a growing catalogue that has already seen them put six past Arsenal and Tottenham and score seven against Norwich this season.

They might even have had more but for a number of good saves from Hammers goalkeeper Adrian.

Summer signing Negredo’s treble took his tally for the season to 18, one behind injured team-mate Sergio Aguero.

The hosts certainly needed little time to break into their stride as they took immediate command of the game.

West Ham were troubled in the opening moments as Samir Nasri cut open their defence and Toure crossed looking for Pablo Zabaleta.

The Argentinian was denied a shot but the ball rebounded and Adrian needed to keep out a ricochet off Negredo.

The warning signs were clearly there as Javi Garcia headed narrowly wide from a corner.

City took the lead as Toure, with plenty of time in the centre of the field, picked out Negredo with superb long ball.

The Spaniard’s technique was equally brilliant as he allowed the ball to drop over his shoulder before lashing a powerful left-foot volley into the bottom corner. 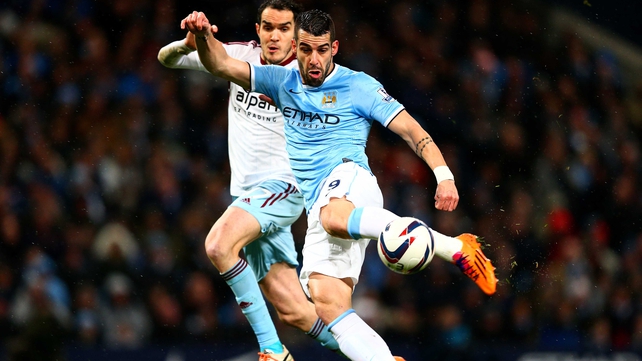 After that it seemed all too easy for City as Toure robbed Mohamed Diame to launch a raid that led to David Silva and Nasri testing Adrian from long range in quick succession.

As the attack went on Toure stayed down having been hurt in the challenge and there were concerns as he was helped from the field, but City’s talismanic midfielder soon returned.

City doubled their lead after 26 minutes as Negredo latched onto a fine ball from strike partner Dzeko and confidently drove across Adrian into the top corner.

City continued to bombard the beleaguered visitors as Dzeko twice fired over and Negredo also missed the target.

Toure, having clearly run off his knock, then charged through the back-tracking Hammers defence with alarming ease to poke home City’s third five minutes before the interval. 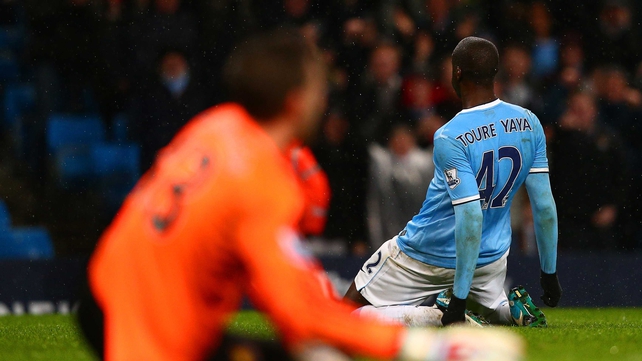 Allardyce sent on Carlton Cole for the second half in an attempt to give his side more shape and firepower but it made little difference.

Negredo completed his hat-trick within four minutes of the restart as he curled a shot past Adrian after Dzeko and Silva had combined.

Toure then fired over from a free-kick and Dzeko sent a long-range effort narrowly over the bar.

There was no respite for the visitors and Silva cut them open again with a cross-field pass for Gael Clichy and the Frenchman’s cross was slid home by Dzeko for 5-0 on the hour.

That marked the end of Toure’s work for the night as Pellegrini started to look ahead to weekend trip to Newcastle.

Yet Pellegrini’s attacking ethos did not change and Johnson recovered to block a Negredo shot and Adrian beat away a Dzeko header.

Adrian produced another good stop to deny Dzeko after another incisive move but it merely stemmed the tide as the Bosnian thumped in City’s sixth from an Aleksandar Kolarov cut-back a minute from time.