Jono Gibbes: ‘It’s a satisfying result and puts a spring in our step for next week’

The Heineken Cup Pool One leaders were staring at their second successive European defeat after Richie Gray and Brice Dulin touched down for a 14-0 Castres lead after 20 minutes.

It was a gutsy recovery from the 2011 winners, who struggled at scrum-time against the powerful French champions and had to scramble in defence on a number of occasions.

“Castres delivered everything we thought they would – they were massively combative, very physical at the breakdown and a good set-piece,” said Gibbes.

“It took a massive effort from us to score three tries and we almost sniffed out an opportunity for a fourth at the end.

“To come to a place like this against a well-organised team that haven’t given up a lot of tries at home, it’s a satisfying result and puts a spring in our step for next week.”

Commenting on his side’s early lapses, the New Zealander admitted: “It wasn’t an ideal start.

“The way they were able to gain access was more about our deficiencies rather than them creating a hell of a lot – but they’re a good team, we gave them a little bit and they took those two tries early.

“We just felt if we were able to get a little bit of a foothold with possession, particularly at set-piece, that we may be able to put pressure on them later on…and it took quite a long time to do that.

“I thought the boys’ resilience and energy and their commitment to keep getting up and running into these big fellas here was first class.”

Having become the first away team to win in Castres since last January, Leinster now need just one match point at home to the Ospreys next Friday to qualify for the last eight as pool winners.

Leinster are four points ahead of second-placed Northampton Saints who host Castres in round six, with Gopperth eyeing up another win to seal a home quarter-final. 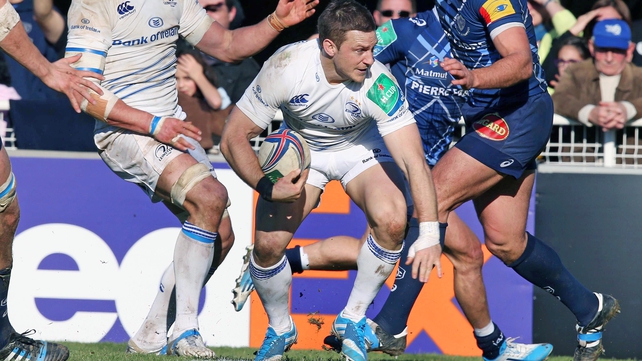 “Of course you want a home quarter and to achieve that we’ve got to win the game next week,” said the Kiwi number 10.

“We’ve just got to make sure we get the points on the board early, make sure we win first and let the game take care of itself after that.

“Hopefully we’ll get a good outcome from it.”

Gopperth singled out the collective belief shown by the Leinster players as an important factor in their fight-back in the south of France.

“We were disappointed with missing a couple of first-up tackles that got us into that situation (of being 14-0 down).

“It’s the belief in each other and wanting to work hard for each other.

“Leinster have always been a great scrambling team and I think we just worked hard for each other because we want to be in the top eight.

“Our set-piece took a bit of a hard knock and they got their act into gear and we really got some go-forward ball and looked after it in the second half. That’s when we created opportunities and we finished well.”