By Mary Milliken and Piya Sinha-Roy 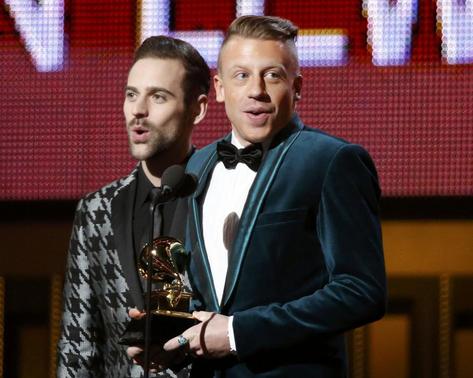 LOS ANGELES (Reuters) – The two surviving Beatles, Paul McCartney and Ringo Starr, came together at the Grammy Awards on Sunday for a rare joint performance coinciding with the 50th anniversary of the British group’s breakthrough on American television.

While the music industry celebrated some of the biggest stars of the past, it anointed newcomer rapper-producer duo Macklemore & Ryan Lewis with the Grammy for best new artist and gave them the opportunity to preside over a mass wedding to celebrate same-sex equality later in the show.

The 56th Grammy Awards, the music industry’s top honors handed out by the Recording Academy across 82 categories, may be remembered more for its performances and unscripted moments than the awards that are bestowed.

With McCartney at the piano and Starr at his drums, the two played a new song “Queenie Eye,” a catchy tune that hearkened back to the Beatles’ trademark hits. It was only the fourth time they had performed together on stage since a 2002 concert to honor the late George Harrison. John Lennon’s widow, Yoko Ono, and son Sean Lennon were in the crowd dancing along on Sunday.

Minutes into the three-and-a-half-hour show, Beyonce and rapper husband Jay Z sang “Drunk in Love,” her first public performance since her surprise self-titled album in December, a game-changer in the music industry for its stealth release.

The first hour was then dominated by scaled-back, intimate performances by John Legend, Taylor Swift, Lorde and Keith Urban and Gary Clark Jr., spotlighting the artists’ vocals and music.

The night was poised to be a big one for Seattle-based Macklemore & Ryan Lewis, who rose through the independent music scene to storm the mainstream charts with hits such as “Thrift Shop” and “Same Love,” a homage to marriage equality and gay rights.

They will perform “Same Love” with vocalist Mary Lambert later in the show as 34 couples, both same-sex and heterosexual, marry on air during the live broadcast on CBS. Queen Latifah will officiate at the nuptials.

Pharrell Williams and Daft Punk picked up the Grammy for best pop/duo group performance for their dance hit “Get Lucky.” Williams also won music producer of the year for his work with artists including Robin Thicke, Jay Z and Jennifer Hudson.

“It was magic for me playing with these guys,” said McCartney, adding “I found myself in the middle of a Nirvana reunion and I was very happy.”

Newcomer Lorde, the 17-year-old singer from New Zealand, won best pop solo performance for her hit song “Royals,” which she also performed on the Grammy stage.