Luis Suarez heaped the pressure on Andre Villas-Boas with two goals as Liverpool condemned Tottenham to the biggest home defeat of the Portuguese’s reign with a 5-0 victory.

Suarez was imperious for Liverpool, with the winning margin not flattering the visitors at all.

Tottenham were booed off by the few fans who had stayed to watch until the end.

Their defensive line always looked vulnerable to Liverpool’s pace, and the way in which they crumbled will be a big concern to Villas-Boas, especially after Spurs lost in a similarly humiliating fashion against rivals Manchester City a few weeks ago.

Tottenham, who had Paulinho sent off for a studs-up challenge on Suarez, did not have a shot on target all match. Roberto Soldado floundered up front once again despite his improved showing in the Europa League.

His opposite number Suarez was simply superb. The Uruguayan now has 17 league goals this season. If Roy Hodgson was watching, he will, no doubt, be scared about the prospect of facing the striker next summer.

Of more immediate concern to Tottenham fans will be the form of their team.

The Londoners are five points outside the top four having spent £110million this summer and their fans are growing restless.

Not even a win over West Ham in the Capital One Cup will silence the doubters who claim Villas-Boas is not the man to lead the club forward.

After weathering a hectic opening 10 minutes, Liverpool started to get into the game.

Suarez was at the focal point of every attack. The former Ajax man gave his marker the slip to break the Spurs defence, but Kyle Walker came to the rescue with a crucial block.

After a 10-minute period of pressure, Brendan Rodgers’ team took the lead and it was no surprise who scored it.

Michael Dawson could not keep control of the ball following a tackle on the edge of the area. The ball fell to Henderson who slipped in Suarez and he clipped the ball past Hugo Lloris despite a last-ditch attempt from Walker.

Lloris raced off his line to block Suarez after he broke through moments later.

Philippe Coutinho was the next man to test Spurs, hitting the bar to set nerves jangling.

Mousa Dembele carelessly gave the ball away and Liverpool piled forward on the break. The only way Dawson could stop the galloping Henderson was to bring him down, earning a booking that means he will miss the next match. 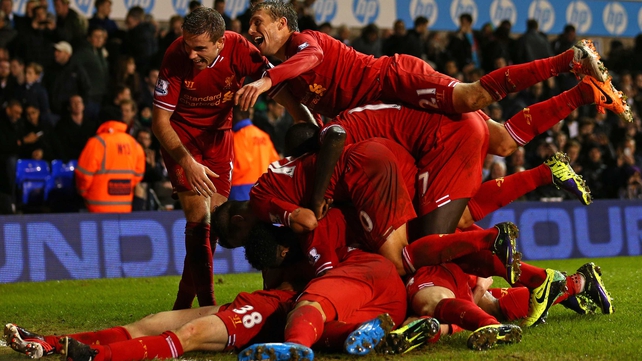 Lloris went walkabout again, coming out of his box to clear with a weak header, but luckily for Spurs, Suarez did not take advantage.

Nacer Chadli missed a free header in the box and Roberto Soldado fluffed a weak shot, but otherwise Tottenham looked toothless in attack.

Villas-Boas was forced into making an early change when Sandro went off with an injury to be replaced by Lewis Holtby.

Liverpool continued to dominate and their inevitable second goal came five minutes from the break.

Again, Liverpool had a man over on the break as they poured forward. Lloris was forced into two last-ditch saves from Henderson and Suarez, but the Frenchman could do nothing to stop the midfielder’s second attempt.

Tottenham had the ball in the net just before half-time, but Soldado’s strike was ruled out for a barge on Simon Mignolet.
Spurs were booed off at half-time. Villas-Boas put Naughton out of his misery and replaced him with Zeki Fryers.

Liverpool did not relent after the break. Mamadou Sakho beat his marker to a header in the box, but the ball smacked a post.

The rain starting teeming down and Tottenham’s spirits dampened when Paulinho was given a straight red for planting his studs into Suarez’s chest.

After a few minutes’ treatment, Suarez got to his feet. Tottenham fans branded the player a cheat and Villas-Boas shook his head at the decision.

Tottenham’s misery was compounded 15 minutes from time when Flanagan’s half-volley crashed into the net off the underside of the bar.

Rodgers blazed down the touchline towards the ecstatic away fans. Villas-Boas stood on the touchline, hands behind his back wondering how it had come to this.

The frustration was starting to tell on Holtby, who was lucky to avoid a second booking after remonstrating with referee Jon Moss.

Tottenham fans started leaving with 10 minutes left. More fans then headed for the exits when Suarez latched on to Luis

Alberto’s through ball and lifted the ball over Lloris to make it 4-0.
Sterling wrapped up the humiliation in 89th minute and the Liverpool fans taunted Villas-Boas, claiming he would be “sacked in the morning”.