Scottish support for independence has risen to 49%, an Ipsos MORI poll showed on the eve of a referendum that could break the United Kingdom apart.

The Ipsos MORI poll showed support for Scotland staying in the United Kingdom on 51%, the STV news broadcaster said.

Support for independence had risen seven percentage points since a similar poll on 5 August while support for the union had fallen by the same amount, it said.

However, thousands of citizens are still agonising over which way to vote.

Leaders and supporters of both sides have taken to the streets for a final day of campaigning in a country gripped by excitement and hope balanced by a strong measure of dread and concern.

Voters will be asked to answer Yes or No to the question: “Should Scotland be an independent country?”.

A Yes vote would spell the end of the 307-year-old union with England and the break-up of the United Kingdom – as well as economic uncertainty.

Last night, four surveys – from pollsters ICM, Opinium, Panelbase and Survation -showed support for independence at 48% compared with 52% backing for the union.

They found 8-14% of Scotland’s 4.3m voters are still undecided, despite polls opening at 7am tomorrow morning.

British political leaders have promised greater autonomy for Scotland if people decide to stay in the union, but independence supporters say it is time for Scotland to choose its own leaders and make its own decisions free of rule from London.

Scottish First Minister Alex Salmond, who has led the campaign for independence, urged Scots: “Wake up on Friday morning to the first day of a better country.”

In an open letter to voters, Mr Salmond said Scotland’s future was in their hands.

Invoking 18th century economist Adam Smith and Scotland’s greatest poet Robert Burns, he said: “Don’t let this opportunity slip through our fingers. Don’t let them tell us we can’t. Let’s do this.”

“Whatever the result, we are a democracy. You have to respect the expression of people through the ballot box,” he said in an interview.

Mr Cameron has visited Scotland twice in the past week to appeal for it to stay in the United Kingdom’s “family of nations”.

However he is unpopular north of the border and is often dismissed as the epitome of the disdained English upper-class.

Asked if he woke up in the night sweating over the possibility of defeat, he replied: “Of course.”

All three polls showed nationalists had gained ground but the fact that supporters of the union were ahead prompted investors to buy the pound, extending sterling’s gain against the dollar.

“It is very tight,” John Curtice, professor of politics at Strathclyde University, told the Scotsman newspaper.

“At the moment it looks as if the Yes campaign is going to fall agonisingly short from their perspective.” 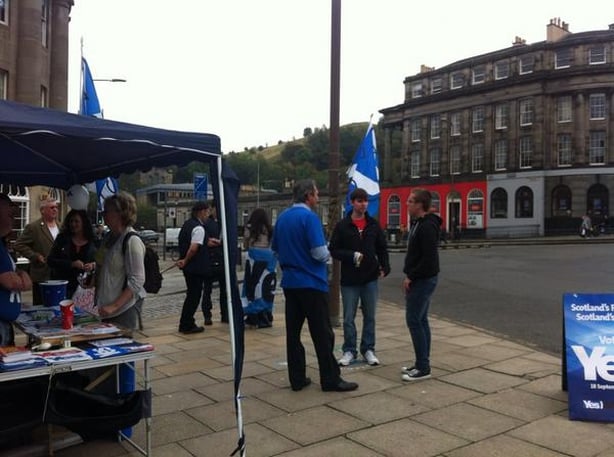 Hundreds of independence supporters have rallied in Glasgow, today chanting “Yes we can and we will” and listening to speeches by activists on the steps in front of the Royal Concert Hall.

“We’re on the verge of victory because we’ve reconnected so many people with the political process,” Patrick Harvie, the Scottish Green party leader, told the crowd. “Nothing’s going to be the same again, whichever way it goes.”

With more than 486,000 voters, Glasgow is a crucial battleground and the way its traditional Labour supporters go will be decisive.

Also in Glasgow, former British Prime Minister Gordon Brown told a rally of union supporters that the independence advocates “are leading us into a trap”.

People in the crowd waved posters with giant hearts and the slogan “Love Scotland, Vote No”.

Coveney has no fears over corporation tax

Minister for Agriculture Simon Coveney has said he has no fears in regard to any corporation tax changes that may emerge after the Scottish independence referendum.

Speaking at the opening of a new thirty five million euro whiskey distillery in Tullamore, Mr Coveney said the people of Scotland have a huge choice to make tomorrow that will have implications not just for them but the rest of the UK.

Mr Coveney said the Government would respect and work with whichever decision is made and we are likely to see the highest every turnout.

“Ireland is used to competing with other countries in terms of attracting investment” he said.

The minister said the growth of the Irish whiskey business was now going to mean that instead of just four of five distilleries in the country – as it is now – there will be between 15 and 20 in ten years time.

He praised management at William Grant and sons for bring back the distilling of whiskey in Tullamore for the first time in 60 years since the old distillery closed there.

The momentum gained by the Yes campaign in recent weeks has caused panic among the British establishment, with banks, businesses and investors weighing in to predict doom and gloom if Scotland breaks away from the union, including job losses, rising prices and a capital exodus.

The question of which currency an independent Scotland would use has so far gone unanswered.

British political leaders have dismissed Mr Salmond’s contention that Edinburgh and London could agree on a currency union under which Scotland keeps sterling.

Pro-union campaigners have also highlighted official figures which showed employment in Scotland had risen 45,000 in the three months to July, as an example of the United Kingdom being better off together.

“Not voting, or voting Yes will send our country down the high risk road to irreversible separation and economic disaster,” said Danny Alexander, a Scot and senior minister in Britain’s finance ministry.

The Scottish edition of the Sun newspaper declined on Wednesday to take sides. As Scotland’s best-selling daily, its stand had been eagerly awaited but it said in an editorial simply that it believed in the people of Scotland to make the right decision.

In an open letter, 14 former chiefs of the British Army, Royal Navy and Royal Air Force warned that a vote for independence would undermine defence in both Scotland and the United Kingdom.

“The division of the UK may or may not be politically or economically sensible, but in military terms we are clear: it will weaken us all,” they wrote. 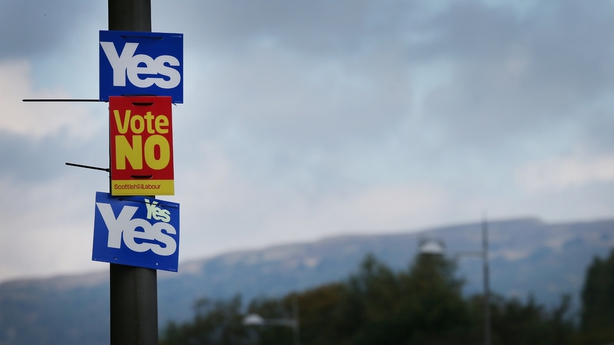 Prospect of lengthy negotiations ahead

If Scots vote for independence, Britain and Scotland would face lengthy negotiations over everything from sharing North Sea oil tax revenue and a future currency to membership of the EU and the future of Britain’s main nuclear submarine base, which Mr Salmond’s Scottish National Party wants out of the country.

The prospect of breaking up the United Kingdom, the world’s sixth-largest economy and a veto-wielding permanent member of the UN’s Security Council, has prompted citizens and allies alike to ponder what would be left.

The White House said it would prefer the United Kingdom to remain “strong, robust and united”.

In the face of the biggest internal threat to the United Kingdom since Irish independence nearly a century ago, the leaders of Britain’s three main political parties have promised to devolve more powers to Scotland if it stays.

In a deal brokered by Mr Brown, they said they would retain the funding equation that sustains a higher level of public spending north of the border.

British leaders accept that even if Scotland votes to keep the union, the United Kingdom’s structure will have to change as the rush to grant so many powers to Scotland will provoke calls for a less centralised state from voters in England, Wales and Northern Ireland.