Home/Music/Eyeing holiday sales, more US retailers to open on Thanksgiving – Reuters
Previous Next 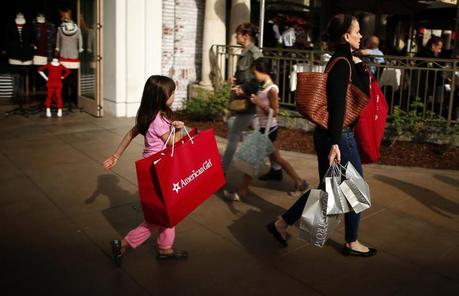 (Reuters) – Macy’s Inc (M.N) and a slew of other U.S. retailers are opening on Thanksgiving for the first time ever in a bare-knuckled brawl for a bigger slice of overall holiday sales.

But it might not be so easy to lure most Americans from their turkey and football – particularly if the weather is foul.

Sales trends, survey results and an online “Save Thanksgiving” backlash suggest that shoppers may resist the urge to splurge on the popular holiday.

But with six fewer shopping days this year than in 2012, retailers who get nearly half of annual profits during winter holiday season are nibbling away at Thanksgiving.

Target Corp (TGT.N), Best Buy Co Inc (BBY.N) and Toys R Us are opening earlier on Thursday than they did last year.

Kmart (SHLD.O) is opening at 6 a.m. and many will offer so-called doorbuster deals starting as early as 6 a.m. EST (1100 GMT) on Thanksgiving. Meanwhile, many Wal-Mart Stores Inc (WMT.N) U.S. locations will be open all day with Thanksgiving specials offered beginning at 6 p.m.

“The ones that are opening earlier are going to get more sales, but in the end, I don’t think the overall pie gets any bigger. It’s just a share gain,” said Brian Yarbrough, a retail analyst with Edward Jones.

He also estimates that overall sales for November and December will be up 2.8 percent. That is more conservative than the 3.9 percent jump forecast by the National Retail Federation.

The profit on those extra sales will depend on whether the eye-catching doorbuster sale prices are margin-squeezing loss leaders, analysts said.

The NRF expects up to 140 million shoppers to hit U.S. stores during the Thanksgiving weekend, slight more than the 139 million who turned out last year.

A wintry blast of heavy rain, wind and snow across the eastern United States disrupted Thanksgiving travel plans for many on Wednesday, but colder temperatures and drier conditions from Thursday in many U.S. markets means limited impact to business over the big shopping weekend, said Evan Gold, senior vice president of client services at Planalytics.

The storm “is providing some challenges for people to get to grandma’s house, but the reality is, from a business perspective, it’s the ideal scenario,” Gold said. “Everything’s going to clear out. It is going to be cold and dry which are the two things you want for foot traffic over Black Friday weekend.”

At Macy’s flagship store in New York City, five hundred employees will be working on Thanksgiving Day. The store, two blocks from the Empire State Building and one of the Big Apple’s most visited tourist sites, will be open for 26 straight hours, starting on Thursday at 8 p.m. EST, spokeswoman Elina Kazan said.

While U.S. home prices and stock market gains have many upper-income shoppers feeling more confident, data from ConsumerEdge Research’s tracking study indicates that there may have been a sharp pullback in consumer spending so far this month.

Low-income shoppers, who often face dismal work prospects and struggle to make ends meet, have been hard hit this year by a reduction in government food stamp benefits.

High earners are better off, but they are concerned about rising healthcare costs and the prospect of yet another U.S. government debt fight on Capitol Hill early next year. They also worry that home and stock prices may be topping out and that the job market may not see further gains.

“They’re not rushing out on huge shopping sprees,” said ConsumerEdge analyst Peter Reidhead. “We’d be surprised if a strong upswing in December can offset the weak November results and the shorter shopping cycle.”

A new survey from Deloitte suggests that fewer shoppers will hit stores on Thanksgiving and Black Friday this year versus last year.

Among holiday weekend shoppers, 13 percent plan to shop in stores on Thanksgiving, down from 23 percent last year, according to the online survey of 1,000 consumers.

Black Friday has for years been the official kickoff of holiday shopping season and is still is predicted by ShopperTrak to be this year’s biggest day of the season for sales and traffic. This year, 53 percent of survey respondents said they planned to shop the on the day after Thanksgiving – down from 63 percent in 2013.

“Thanksgiving is the fastest growing day for e-commerce during the holiday season,” said Andrew Lipsman, comScore’s vice president of marketing and insights. “There is a broader cultural norm where people feel it’s OK to shop on Thanksgiving.”