The Ireland lock and former British and Irish Lions captain delivered another of his trademark towering displays as Munster secured top spot in Pool Six.

Tries by wing Keith Earls and skipper Peter O’Mahony, plus 10 points from the boot of fly-half Ian Keatley, took Munster into their 15th Heineken quarter-final.

“There are certain characters in teams that have a huge influence and effect. It is not just his ability as a rugby player, it’s how he galvanises the team, and his sheer presence is a huge factor for Munster.”

Davies’ sentiments were echoed by Munster head coach Rob Penney, who added: “Paul is just such an amazing character, and at this level of the game you wouldn’t want anyone else out there, really, guarding your ship.”

“He (Ian Keatley) was tremendous today, probably the best game he has had in the red jumper” – Rob Penney

But Munster joined fellow qualifiers Ulster, Leicester, Clermont Auvergne and Toulon in the last eight, and if they beat Thomond Park visitors Edinburgh in next weekend’s final pool fixture then it should be enough to secure a home tie.

Gloucester can only dream of such consistency and success, but at least their display will give renewed hope to supporters who have seen their team suffer seven home defeats this term.

Davies added: “It was a great match of huge intensity. That level of performance from us was an absolute must in terms of intensity and intent, and I was really pleased. 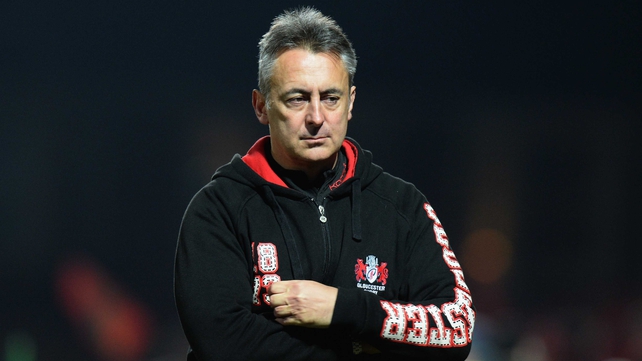 “There were elements of our game that we were not accurate enough in, such as our lineout and finishing, but they are in our control. Munster were fantastic defensively. We threw everything at them, but they kept us out.

“Munster have got this inner belief to come through tight encounters. They would have felt under the cosh today for large periods with the way we went after them, but that belief is deep within them.

“For me, I would like to think that last week (Gloucester lost 29-8 at home to Saracens) was a watershed in many ways for this team.

“We’ve set the bar in terms of intensity, commitment and work-rate today, and that has to be the bare minimum that we produce for the rest of the season.

“If we do that, then we are going to win more games than we lose.”

“We have got a lot of faith in Ian,” Penney said. “He was tremendous today, probably the best game he has had in the red jumper. He deserves all the plaudits that I hope he gets.

“He showed mental and physical fortitude out there. He tackled like a Trojan, and he put us in some really good places on the park.

“Gloucester have got an amazing attacking threat right across the board, and their try was just a glimpse of what they are capable of when they are given space.

“If they can keep putting performances like that together then they will hurt some teams. On another day, it could have gone the other way, but I am really proud of our lads.

“Both teams really threw themselves at it, and to be able to win these type of games is just so pleasing.”