Lukas Podolski hit a double in the first half

Premier League leaders Arsenal cruised into the fifth round of the FA Cup with a 4-0 win over Coventry at the Emirates Stadium.

The Sky Bet League One side were never given a chance to think about causing an upset as a first-half double from Lukas Podolski put them in control of the tie, with Olivier Giroud adding a third late on after coming off the bench and fellow substitute Santi Cazorla crashing in his third goal in two appearances on 89 minutes.

Wenger, who handed a senior debut to 16-year-old midfield prospect Gedion Zelalem – not even born when he first took charge at Highbury – will now regroup his squad for next week’s Premier League trip to Southampton on Tuesday having cruised through without really getting out of second gear.

Arsenal showed their intentions from kick-off, as Jack Wilshere and Lukas Podolski both went close before the Gunners swept into the lead on 15 minutes when the German forward rounded the goalkeeper to score from a tight angle.

Coventry captain Carl Baker forced a good save from Arsenal number two Lukasz Fabianski before Podolski headed in a second at the far post from a corner. 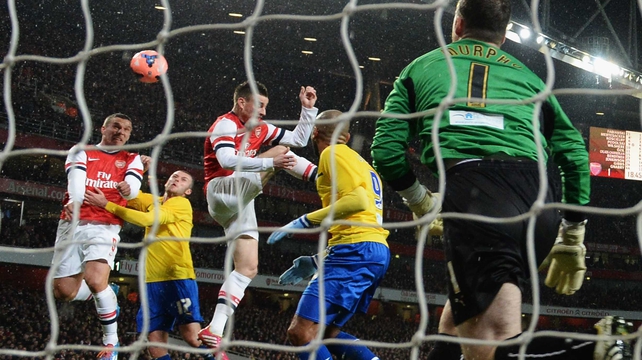 The 5,000 Sky Blues fans held up banners protesting against their move of ‘home’ matches down to Northampton before a part floodlight failure saw supporters across the Emirates Stadium use their smart phones as torches.

Coventry forward Leon Clarke – who has handed in a transfer request – was put clear into the Arsenal penalty area at the start of the second half, but his shot at the near post was saved by the feet of Fabianski and then fired wide having been set up 18 yards out.

There was a brief stoppage when a Coventry fan came on to the pitch, wearing a T-shirt which read “Sisu Out” in protest against the club’s owners.

The tempo of the match dropped during the closing stages, which saw main striker Giroud net his 13th goal of the season from close range before Cazorla – whose double sank Fulham last weekend – crashed in a fourth.

Elsewhere, Andy Reid and Simon Cox both started for Nottingham Forest in their 0-0 FA Cup draw with Preston at the City Ground.