Counting for the local elections is complete in Westmeath and Leitrim

Counting is continuing nationwide in the local elections with 396 of the 949 seats filled so far.

Independents and Others hold 104 seats having received the highest overall first preference vote of 28.4%.

Both Government parties are behind in the polls so far, with Fine Gael holding 78 seats and Labour with 20.

Speaking on RTÉ News Mr Kenny said that the election result was the people telling the Government that they needed to do better.

He said that the Coalition had to reflect and deal with the fears of older people, those with medical difficulties and of hard pressed tax payers.

Mr Kenny also said that the result was difficult for Eamon Gilmore and the Labour party.

Gilmore to continue as Labour leader

Mr Gilmore said that there is no question about his leadership of following the poor results experienced by the party.

Labour has lost heavily in the local elections and also looks to be in danger of losing all of its European Parliament seats.

He said the people of the country had sent a very loud and clear message to the Government and to the Labour party.

He said it was clear that while people understood the need to stabilise the country’s finances, they felt squeezed in their household budgets and wanted the Government to do better. 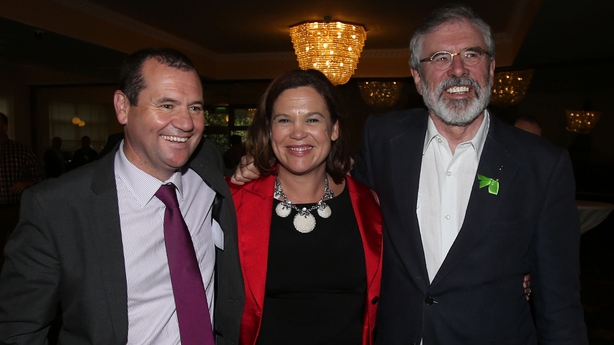 Sinn Féin leader Gerry Adams has welcomed the result, saying this party would ‘use its mandate wisely’.

Speaking to RTÉ News Mr Adams said that Sinn Féin wants to change the way politics works and added that the party did not want to be in Government ‘just for the sake of it’ and would only enter Government if it had a mandate to do so.

Fianna Fáil leader Micheál Martin has said that he is not concerned about the growth in support for Sinn Féin as he said that Fianna Fáil was on a different trajectory and in a ‘different space’ to Sinn Féin.

He also rejected suggestions that he would be looking over his shoulder for the next two years at what Sinn Féin would be doing.

Mr Martin said Fianna Fáil would be looking ahead themselves and would focus on their own objectives.

At least three mayor’s have lost their seats so far – Mayor of Clare Joe Arkins, of Fine Gael, and Lord Mayor of Cork Catherine Clancy of Labour.

Three former TD’s have had successful local elections campaigns so far, with Mary Hanafin and Charlie O’Connor of Fianna Fáil and Chris Andrews of Sinn Féin all being elected.

19 former TD’s contested the election and a number of these look likely to also take seats,

Elsewhere, Independent candidate Margaret Gormley has topped the poll in Ballymote-Tubercurry, maintaining her record of topping every poll since 1991.

A number of parties have also seen fresh blood emerge, with 21-year-old Stephen Cunningham of Sinn Féin and 23-year-old Fintan Phelan of Fianna Fáil among the youngest candidates to be elected.

Mr Scully lost the Fine Gael party whip after he made racist remarks about constituents in November 2011.

Speaking on local radio he said that he would no longer represent ”black Africans” in his community because of ”aggression” he received when dealing with them.

Mr Scully was restored to the party in November 2013 and tonight was elected on the fifth count in the Naas Electoral Area.