Nikica Jelavic scored twice and missed a penalty as Everton comfortably progressed into the FA Cup fourth round with a 4-0 win over Championship promotion-chasers QPR at Goodison Park.

Ross Barkley put the Toffees – the 2009 beaten finalists, whose last trophy was the 1995 FA Cup – ahead in the 35th minute, collecting Bryan Oviedo’s pass and slotting home.

Nine minutes later Karl Henry lost possession in the R’s half and Jelavic capitalised by taking the loose ball and smashing it past Julio Cesar from outside the box.

On his first start since September, it was the Croatia international’s first goal since March and he soon had another, finishing from close range in the 68th minute.

Jelavic should have then completed his hat-trick in the 75th, but he struck his spot-kick against the bar having chosen to take it with a chip.

The striker is a reported transfer target for QPR and it will be interesting to see what the future now holds for him.

A minute after Jelavic’s missed penalty, Seamus Coleman wrapped up the scoring with a delightful first-time effort.

When Everton manager Roberto Martinez, who guided Wigan all the way to victory in last season’s FA Cup final, was asked in the build-up to this match if winning the competition or securing a decent finish in the Premier League would be more important to him, he replied: “I don’t think you can choose – it’s like asking who you prefer, mum or dad.”

The first XI he subsequently selected for the contest showed five changes from the New Year’s Day top-flight draw at Stoke.

Jelavic replaced the benched Romelu Lukaku, while in Joel Robles, Antolin Alacaraz and James McCarthy, Martinez started three players that had been part of the Latics triumph at Wembley in May.

R’s boss Harry Redknapp – manager of Portsmouth when they won the 2008 FA Cup – also made five adjustments to his team, which was captained by life-long Everton fan Joey Barton.

QPR had an early attempt on goal when Gary O’Neil fired wide but Everton were soon on top – although it took them a while to create much that was really incisive.

Jelavic saw a strike come off Cesar into the side-netting before Osman shot off-target and efforts from Barkley and Gareth Barry were saved by the goalkeeper with relative ease.

There was a warning at the other end as the ball flashed across Robles’ area, with QPR just unable to apply a finishing touch, but Everton were soon back on the attack, Cesar being called upon to cut out a delivery by Coleman and then blocking the follow-up shot from the same man.

Just after the half-hour mark Barkley brought a diving save out of Cesar, with Leon Osman prodding the rebound over, and it seemed only a matter of time before The Toffees broke the deadlock.

Two minutes later, they duly did as Oviedo came in from the left and played a ball through a clutch of QPR men to Barkley, who escaped Danny Simpson in the box before curling his shot around Cesar in to the corner.

It was the England midfielder’s fourth goal of his impressive season and he was soon seeking out the fifth, sending the ball dipping into Cesar’s hands.

Certainly, it seemed Everton needed no assistance from their opponents, but they got some with a minute of normal time remaining in the first half as Henry miscontrolled, allowing Jelavic the opportunity to rifle the ball past Cesar.

Barkley looked to punish some more sloppy play by the visitors shortly after the break, latching on to a misplaced pass by a QPR man and shooting across the face of goal.

Everton continued to pressurise, with Cesar touching a Coleman shot just wide, and Jelavic then made it 3-0, sliding in to convert Oviedo’s cross. 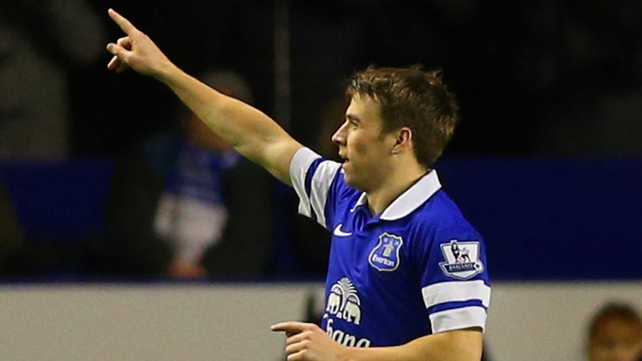 Keen to get his treble, Jelavic took a free-kick soon after which deflected over, and he was then presented with a golden chance when Oviedo, tracked by Nedum Onuoha, was brought down in the box by Cesar and referee Howard Webb pointed to the spot.

Jelavic got things all wrong with the penalty, though, suffering the embarrassment of seeing his cheeky effort connect with the woodwork.

Everton were not done and Coleman deservedly got on the scoresheet within seconds, meeting Barkley’s pass and sending a sweet, rising shot past Cesar – his sixth goal of the season, and fourth in six games.

And the Toffees might have had another, with Clint Hill clearing off the line twice in quick succession to deny Steven Naismith and Jelavic.