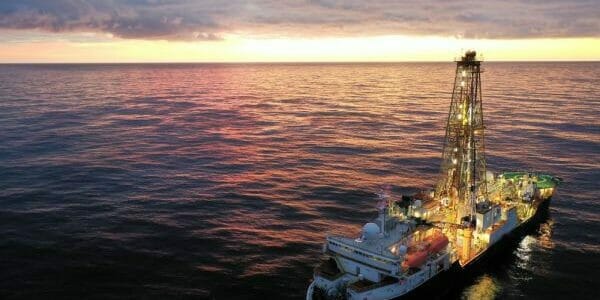 Dr Weimu Xu, a researcher in iCRAG and lecturer in UCD, took part in the International Ocean Discovery Program (IODP) earlier this year.

This is a large international marine research collaboration that explores Earth’s history using ocean-going research platforms to recover data recorded in seafloor sediments and rocks and to monitor subseafloor environments, aiming to understand Earth’s response to a major greenhouse climatic event in the geological past, which will help to plan better in the future fight against climate change.

Weimu spent 2 months on a  cruise to the Mid-Norwegian continental margin. As part of her work, Weimu aimed to recover sediments in hydrothermal vent complexes from deep in geological time.

The expedition explored the nature, cause and climate implications of excess magmatism during the northeast Atlantic continental breakup.

Weimu’s research aims to explore links between past volcanic activity in the north Atlantic, changing levels of carbon dioxide in the atmosphere and how this is linked to warming climates.

In short, insights from Weimu’s work will give a better understanding of past climate change, which will allow us to better predict the current climate change we are now experiencing.

What is your own background briefly, is it a logical background to what you do now?

I was born in a city in the northeast of China, which is known as the oil capital of China since the first discovery of oil in 1959. Being influenced by the history of the city, I went on to study Earth Sciences at Peking University for my Bachelor’s and master’s degree, followed by a PhD at the University of Oxford in the UK.

For my PhD research, I applied sedimentary and geochemical proxies to understand the fundamental processes leading to carbon burial in marine and continental basins during super-greenhouse climatic events in the geological past, e.g. the Mesozoic Oceanic Anoxic Events.

Following the completion of my PhD, I worked as a NERC (Natural Environment Research Council) Knowledge Exchange Fellow at the UK Government’s Department for Business, Energy and Industrial Strategy (BEIS), where I advised policy makers on evidence-based policy making in energy and climate science.

In 2019, I received a Marie Sklodowska-Curie Individual Fellowship award (funded by the European Commission) whilst at Trinity College Dublin, working on Paleocene greenhouse climate and the effect of basalt weathering on carbon sequestration.

What do you do now?

I am a lecturer/assistant professor at the School of Earth Sciences, University College Dublin and a researcher at the Irish Centre for Research in Applied Geosciences (iCRAG). I have a specific research interest in paleoclimatology, carbon cycling and climate change mitigation.

How was the last 12 months, how have you adapted to covid-19, what have you done differently / evolved your working practices / and how is this impacting going forwards?

I had a baby shortly after the pandemic started in 2020 and took half a year of maternity leave. During those days, I was not too much impacted by the covid-19 lockdown as I was on leave. After returning to work, I was mainly working from home.

There was not much I could have done differently, but I did miss being able to meet and chat with colleagues, especially as I started a new job at a new university during this time. Going for the scientific cruise during a pandemic was a challenge, but also a bonus in some ways.

The challenge was that we all had to go through 1-2 weeks’ home quarantine before flying, 1-week hotel quarantine in Reykjavik, Iceland, followed by 2-weeks of mask wearing on the ship per IODP covid mitigation protocol.

After all these restrictions and that everybody was safe, we could work without a mask. Being able to work normal again with 19 other international scientists on the ship closely was such a luxury during covid time, allowing active discussions on major scientific questions and being part of a big team, which is very motivating.

Now that Ireland has lifted most restrictions, I am able to work in the office and in the labs again, which makes me happier and my research progresses faster.

Tell us more about the project you have just been working on?

Ireland is part of ECORD (The European Consortium for Ocean Research Drilling), which coordinates the European and Canadian participation in IODP. Irish participation is funded by the Department of the Environment, Climate and Communications and managed by Geological Survey Ireland.

Therefore, I was able to sail as an Ireland-based scientist on the IODP expedition 396 Mid-Norwegian Continental Margin Magmatism from 6th August to 6th October 2021 at the Norwegian continental margin, during which we recovered Paleogene sediments in hydrothermal vent complexes across the Paleocene–Eocene boundary.

This is approximately 56 million years ago in geological time when a super-greenhouse climatic event took place and the global mean annual temperature rose by 5–8°C. We also recovered volcanic rocks from sub-basalt and initial volcanic flows as part of the North Atlantic Igneous Province volcanism.

This is an area of the North Atlantic, centred around Iceland, where there was prolonged intense volcanic activity during the Paleocene and Eocene, and is still active today at a smaller scale.

Onboard the IODP research vessel JOIDES Resolution, I worked 12 hours a day, 7 days a week primarily as one of the three sedimentologists in the Core Description lab.

Once the cores have been drilled from the seabed and brought back onboard, my job is to describe the split sedimentary cores, image the archive half, and measure the magnetic susceptibility of the core.

During the expedition, I also led/co-led at least 6 ship-to-shore broadcasts to schools and universities in Ireland and the USA, with Irish audiences as young as 11 years old.

These broadcasts showed the students what life was like on the ship, what we were doing and what were the goals and key scientific questions of the expedition. We got great feedback.

The young kids were fascinated by the experience and the university students were impressed and inspired by the research being carried out on a research vessel and being able to link what they learnt in the classroom to application.

More broadly, it illustrates to the wider society why we carry out these research expeditions and their societal relevance.

What was the goal, and were you successful?

The goal of the expedition was to investigate the nature, cause and climate implications of massive volcanic activity during the northeast Atlantic continental breakup which started around 60 million years ago.

There are different theories as to why this magmatism occurred. Voluminous magmatism also coincides with the global greenhouse climate in the early Paleogene and has been proposed as a driver of both short-term and long-term global warming.

However, the timing of the magmatism is not sufficiently pinpointed. Improved understanding of melting conditions, the timing of magmatism, magmatic fluxes, eruption environment, and relative timing of climate events are required to test which of the competing hypotheses is the likely scenario and what are the climate implications of excess magmatism.

The expedition was very successful as we drilled all the planned sites and retrieved sediment and volcanic rocks from all the targeted intervals.

We have retrieved sediments from key stratigraphic/age intervals, e.g. the Paleocene-Eocene Thermal Maximum (PETM), based on the type of fossil marine algae the biostratigraphers identified onboard the JOIDES Resolution.

This is important as the PETM, which took place around 56 million years ago, is widely considered as the closest analogue to anthropogenic climate change, although the PETM was happening at a rate that was 100s times slower.

This gives a sense of just how fast current climate change is happening – at a rate never seen before.

By understanding how the Earth responded to a major greenhouse climatic event in the geological past, we can better predict/project what might happen in the future if we don’t take any action against climate change; and if we would like to avoid any major consequences, what degree of action for carbon emissions reduction is needed.

In geological times, our whole human epoch has been within an interglacial period, – should we be preparing for colder times?

Without human activity, we might be heading to a glacial period. However, due to the excess amount of greenhouse gas released into the ocean-atmosphere system as a result of human activity, the global annual mean temperature now is already over 1°C above pre-industrial levels.

Mass extinctions and loss of biodiversity are already taking place in the ocean and on land at an unprecedented rate. Therefore, immediate actions to reduce carbon emissions as well as actively taking carbon out of the ocean-atmosphere system are needed in order to maintain the Earth as a habitable space.

As has been hot on the media, the main goal for the recent COP26 is for countries to make agreements on how to limit global warming to 1.5°C over pre-industrial levels.

What are your sources of information and inspiration?

My sources of information are mainstream news and scientific literature. My sources of inspiration are making our planet a habitable place and to contribute to that with my own knowledge and research expertise.

How can people find out more about you personally & your work?

You can find more information about my job and my research on my UCD webpage, ResearchGate and Google Scholar. You could also follow me on Twitter, where I post updates about my research and any exciting life journeys. 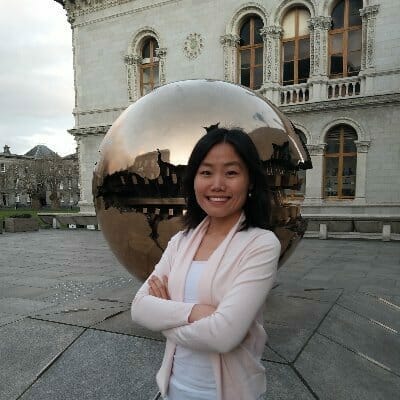 Dr Weimu Xu is an Assistant Professor at University College Dublin. Before joining UCD, she received a Marie Sklodowska-Curie Individual Fellowship award (funded by the European Commission) whilst at Trinity College Dublin, working on Paleocene greenhouse climate and the effect of basalt weathering on carbon sequestration.

Prior to that, she was an iCRAG (SFI Irish Centre for Research in Applied Geosciences) postdoctoral researcher at TCD, exploring a novel negative carbon emission technology using enhanced plant mediated silicate weathering.

Before moving to Ireland, she was a NERC (Natural Environment Research Council) Knowledge Exchange Fellow at the UK Government’s Department for Business, Energy and Industrial Strategy (BEIS), where she advised policy makers on evidence-based policy making in energy and climate science.

Previously, she worked as a geophysicist in Shell China on hydrocarbon exploration projects. She received her DPhil degree from the University of Oxford (UK), and Master’s and Bachelor’s degrees from Peking University (China).