Kilkenny have beaten neighbours Tipperary by six points, 5-20 to 5-14, in an enthralling Allianz Hurling League Division 1A fixture at Nowlan Park on Sunday.

The Cats came from ten points down in a fixture that saw the sides share no fewer than ten goals.

In a match reminiscent of the classic 2003 League final between the counties, Kilkenny collected their first points of the campaign after suffering an opening day defeat to All-Ireland champions Clare.

Tipp beat Waterford at Semple Stadium in their opening League fixture but the Waterford Crystal Cup holders lost for the first time in competitive fare this year.

Colin Fennelly was the star of the show for Kilkenny as the Ballyhale Shamrocks star weighed in with a haul of 3-5, all from play.

On the Tipperary side, Seamus Callanan was unlucky to end up a loser as he struck 3-6, including 3-1 from play.

It was that kind of afternoon at the Kilkenny city venue as Brian Cody’s hosts got off the mark in the top flight following their opening day defeat against All-Ireland champions Clare at Cusack Park in Ennis.

Tipp won their opening fixture against Waterford but the Premier County saw their unbeaten record in 2014 ended by their arch-rivals. 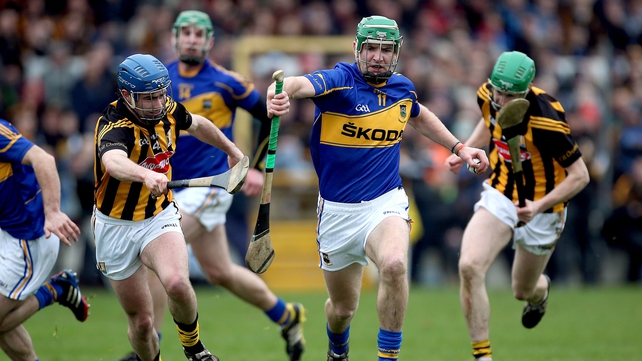 But Eamon O’Shea’s visitors will have left disappointed as they led by ten points in the first half.

In front of 8,651 spectators, Tipp played with the breeze in the opening half and with 14 minutes on the watch, they had already scored 3-3.

Noel McGrath, Jason Forde and Callanan raised green flags for the visitors before Fennelly scored the first of his hat-trick in the 24th minute, after TJ Reid’s shot had crashed off the crossbar.

And yet Tipp went on to establish their biggest lead of the game, 4-9 to 1-8, approaching the break.

Callanan struck for his second goal in the 27th minute but Henry Shefflin, scorer of 1-5, finished beautifully for Kilkenny four minutes later and at the break, Tipp were 4-9 to 2-9 clear.

The scene was set for a wonderful second half and in a repeat of last year’s League final, these ancient rivals didn’t disappoint.

Kilkenny’s third goal was smashed home by Fennelly in the 44th minute but Callanan responded in kind for Tipperary six minutes later.

Kilkenny finally got level in the 56th minute when Fennelly rammed home another picture-book goal to tie the scores at 4-14 to 5-11.

Now 5-17 to 5-14 in front, Kilkenny kicked for home and points for influential sub Richie Hogan, Fennelly and Hogan again clinched the win for Brian Cody’s battlers.

Walter Walsh, All-Ireland final replay man of the match in 2012, was another to catch the eye with five points from play, including four in the first half alone when Kilkenny were attempting to keep pace with Tipp.