Home/Brazil to face Croatia in World Cup opener
Previous Next The draw for the 2014 World Cup sees hosts Brazil take on Croatia in their opening match, while England have been drawn in a group alongside Italy, Uruguay and Costa Rica.

Placed in Group D, Roy Hodgson’s England will face the Italians in their opening game in Manaus on Saturday, 14 June.

They must then head to Sao Paulo and Belo Horizonte for their meetings with Uruguay and Costa Rica on 19 and 24 June respectively.

World champions Spain will take on the Netherlands, the side they beat in the 2010 final, in their first match next summer. Also in Group B are Chile and Australia. It’s a tough-looking group, though perhaps not as difficult as Group G where Germany are up against Portugal, Ghana and the United States.

Group E looks the easiest, where France will be up against Switzerland, Ecuador and Honduras, while in Group F Lionel Messi and Argentina are up against Nigeria, Iran and debutants Bosnia-Herzegovina.

There are three World Cup champions in one group (Uruguay, Italy & England in Group D)

The Boateng brothers (Jerome and Kevin Prince-Boateng) face off in Group G.

Spain and Netherlands, who contested the 2010 Final, will face off in their first game in Group B. 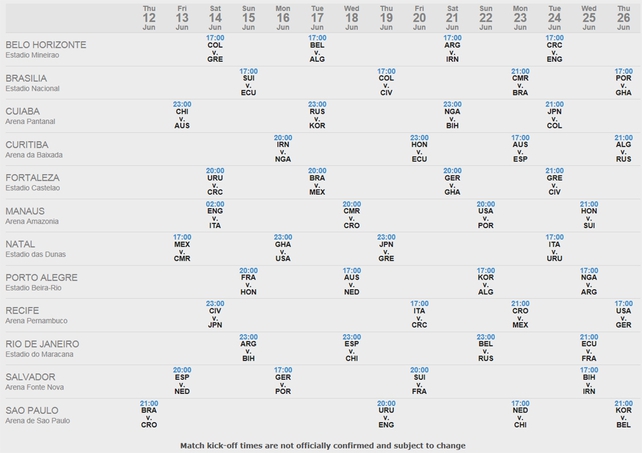