Riot police officers clash with demonstrators during the March for Dignity in Colon square (pic: EPA) Various cities in Spain have called ‘Marches for Dignity’ in order to stress the importance of people’s dignity, despite the crisis

Hundreds of thousands of Spaniards have protested in Madrid against poverty and EU-imposed austerity in a largely peaceful demonstration later marred by violent clashes in which police fired rubber bullets.

Some protesters started to throw stones and bottles at the large numbers of riot police present and attacked cash points and hoardings.

The police fired rubber bullets to disperse them, according to video footage. 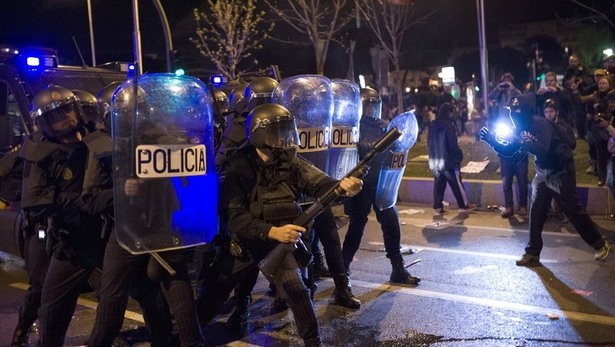 Central government representative Cristina Cifuentes said 19 protesters had been arrested and 50 police officers had been injured, one of them very badly, in the clashes.

The so-called “Dignity Marches” brought hundreds of thousands to the capital, according to estimates of witnesses.

Travelling from all over Spain, they were protesting in support of more than 160 different causes, including jobs, housing, health, education and an end to poverty.

Banners urged the conservative government not to pay its international debts and to tackle Spain’s chronically high unemployment of 26%.

The OECD says the economic crisis has hit Spain’s poor harder than in any other country in the group.

A housing bubble burst more than five years ago, forcing a €41bn bailout of Spain’s banks, squeezing homeowners and throwing millions out of work.

The government introduced public sector austerity to whittle down the deficit, provoking widespread anger amongst middle- and low-income families as dozens of cases of corruption in the ruling class are investigated by judges.