We witnessed a fantastic finish to the RBS 6 Nations, one in which the right team emerged as winners.

Ireland won on points difference despite having the toughest draw with away matches in London and Paris. In all the fundamentals, the stats show that Ireland were incredibly consistent and leaders in key categories.

But for this piece I’m going to look at the three tries Ireland scored against France. Taken together, the first two were perfect examples of the gains Ireland have made under Joe Schmidt. The third is an exciting hint at the team they have the potential to become.

The first try came from the ‘ground and pound’ mode that we have seen Ireland use to such good effect when they get into the opposition ‘22. The focus is on building phase after phase with one-pass rugby, and ball-carriers playing flat on the gainline and having two or three support players ready to clean out quickly.

It is about speed, quality ball presentation and being relentless and the goal is to stress the defence. Nearly all tries scored through this method come from errors and the goal is cause one.

In this case the mistake came when Yoann Maestri knocked over his team-mate Thomas Domingo from behind. Domingo was actually in the perfect position to tackle Chris Henry, who delivers the scoring offload, but Maestri took out his own man from behind. 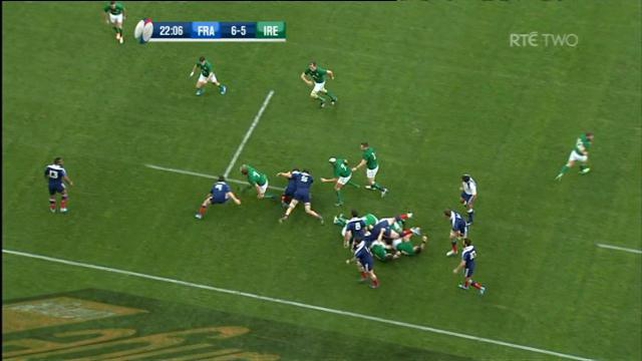 That created the space for Henry to attack the second defender and give Sexton a route to get over the line.

It was a stupid error by France, but those are the things happen when you tire a defence. Ireland’s work on the training pitch – two-minute ‘killer’ drills with 15 v 15 and the likes – really paid off.

The second try came from a typical Schmidt powerplay. These started with video analysis. In this case the key element was to recognize that the French front five tended to be slow to break out of defensive scrums and to know where the French back-rowers would go in a certain situation.

Ireland got the right situation – a scrum near the right touchline – when Louis Picamoles dropped a routine catch.

But to take advantage they had to execute a whole range of small things perfectly.

First, they needed a quick ruck in the right part of the pitch. Brian O’Driscoll delivered it with help from Sexton, Gordon D’Arcy and Rob Kearney, who ran lines that kept Mathieu Bastareaud and Gael Fickou interested and gave O’Driscoll the one-on-one with Remy Tales. He was able to dominate that contest and at that point, Ireland were in a great position – well across the gainline and with quick ball.

Meanwhile, back at the scrum, they had wheeled the French away from the play after the ball had left the scrum. That put the French tight-five and Alexandre Lapandry were out of the picture.

The other two back-rowers, Louis Picamoles and Damien Chouly, were trying to do their jobs by getting to the far side of the next ruck.

The wheel and the knowledge of where the French back-rowers had created huge space down the right hand side of the key ruck. 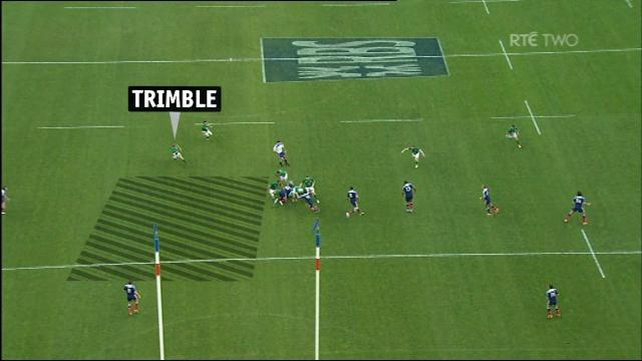 The move actually almost came unstuck, because Picamoles was so late out of the scrum that he was almost in a position to make a tackle on the strike-runner Andrew Trimble but was not quite in position to make it.

Trimble had taken a superb line, cutting down the blindside at the last second.

Henry has taking up a blocking position at the side of the ruck to Sexton, who clears out the ruck and then bounces up to support Murray.

Even then there was more to do. Maxime Machenaud had also spotted the threat and moved to shut it down but Murray improvised brilliantly, drawing Machenaud before releasing his pass to Trimble and he goes over virtually untouched to complete a brilliantly structured move that lasted just 13 seconds.

There is so much going on and so many small jobs being done right. We hear so much about it, but this is what attention to detail really means.

In scoring their first two tries, Ireland had done things we had already seen in this Six Nations. The third try is interesting because it gave a real indication of where this team can go.

Unlike most of the 16 tries Ireland score in the Six Nations, it began deep in the Irish half, on the 22-metre line, and came from turnover ball.

Rob Kearney starts the move, taking it as far as the Irish 10-metre line and setting it up for Murray, who passes to Cian Healy. Healy then sets up another ruck and that is key.

Ireland actually already had an overlap when Healy took it forward.

A lot of teams would have a two- or three-pass rule in that situation but the space on offer can often be deceptive, because the defence can drift and use the touchline to manage the threat. By taking it into contact, Healy drew in two extra French defenders.

At the same time, Trimble moved in off the left wing and into the Irish attacking line, slotting in just inside O’Driscoll. 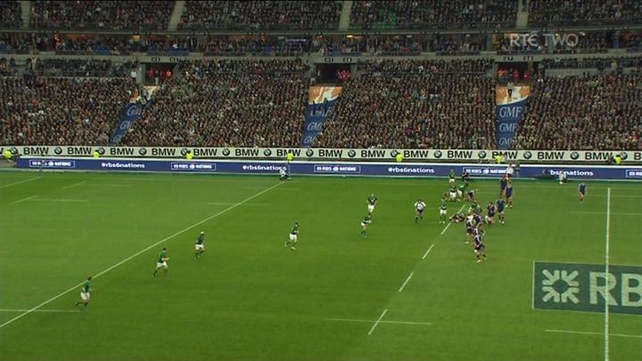 From there, Ireland executed perfectly with Sexton flattening up and D’Arcy drawing and fixing Vincent Debaty. That left Pascal Pape isolated and when hesitated, waiting for help from the inside, Trimble used his speed to burn him.

Ireland had made 80 metres in seconds and almost scored. Brice Dulin actually did well to stop O’Driscoll short, holding off and forcing him back inside and allowing Maxime Medard to make the tackle.

But the work-rate by Best, D’Arcy and Paul O’Connell gave Ireland a quick recycle and that allowed Sexton to arrive, pick a hole and get over.

Three tries, three different aspects of Ireland’s game under Schmidt and three reasons to be very hopeful about the future.

France Six Nations contenders? Philippe Saint-Andre said after the match that France were now contenders to win the World Cup. They have the ability, but I am not convinced that he is the man to bring them the consistency they need to be a force.

In next year’s Six Nations they have to travel to Dublin and London and I think that winning in either venue will be beyond them. Saturday’s performance will probably keep Saint-Andre in a job though.

By the way, Ireland’s display was applauded in France and all the French people that I have spoken to since the game have been very complimentary about the style and quality of the rugby that we played.

One of the most noticeable factors from the tournament was that every Irish player performed well. That is partly why Schmidt struggled to rotate his selection. There were standout players across the team but one of the best things about this campaign was the way Devin Toner, Peter O’Mahony, Chris Henry, Andrew Trimble and Dave Kearney came through and proved that they are top class players.

Player of the Championship?

The rest of the Irish team had, of course, already shown their quality. For me, though, the player of the championship in green was Cian Healy. From great lifting at kick-off and lineout time to destructive scrimmaging and real aggression at the ruck, he was brilliant. With Sean O’Brien absent, he was also one of our best ball carriers. I think he is the best loosehead in the world at the moment.

A coaching career for BOD?

Brian O’Driscoll bows out with the finish he deserved. There has been speculation this week that he could continue in the Irish game in a coaching capacity. Certainly of all the players that I played with he has the attributes to make a phenomenal coach.

He was always interested in why and how things were done and could design plays and tactics brilliantly as he knew exactly what would work against certain defensive systems and individuals. It is up to Brian what he wants to do and he probably feels like a break from the game for a little while. But he is a competitor and he may miss the direct involvement in elite sport.

More to come from Ireland

I think this campaign is only the start. Players like Donnacha Ryan, Tommy O’Donnell, Keith Earls, JJ Hanrahan, Simon Zebo, Stephen Ferris, Tommy Bowe, Craig Gilroy and Sean O’Brien are all waiting to come in and bring more depth to our playing group.

Alongside that, I also expect Ireland to add more offloading to their armoury. We had the lowest amount of offloads in the competition with only 27 over five games. Leinster and Clermont under Joe Schmidt they all excelled in this area.  Argentina and the November Tests could see further development in that area.

Provincial rivalry – the dynamic is good

There was some negative comment about the number of Leinster players in the Ireland squad. In one sense, the results speak for themselves and the most important thing for me is that Ireland is successful.

Joe Schmidt will pick the players that he thinks will do the best job for any particular match, regardless of the provincial jersey they wear.

We have a coaching set-up that communicates exactly what they want from their players and the fringe players know what they have to do to break into the team. That will drive the standards of play even higher in all the provinces on. The dynamic is good and should help Ireland win even more in future. I for one am excited by that scenario.