Cabin crew have described their roster as ‘erratic’

Aer Lingus cabin crew members have commenced a 24-hour strike in a dispute over rosters, with pickets placed at Dublin, Cork and Shannon airports.

The airline has been forced to reschedule thousands of passengers who were due to travel today.

The strike is estimated to be costing the airline up to €10m.

Aer Lingus normally carries 40,000 passengers on a bank holiday Friday, but almost all their planes are grounded today.

Over 200 flights have been cancelled, though Aer Lingus hired in planes and crews to operate extra services yesterday and tomorrow.

At 10.30am, cabin crew will march through Dublin Airport to Aer Lingus headquarters to hand in a letter to management.

The Irish AirLine Pilots’ Association has urged members to attend that march where possible.

Fifty cabin crew belonging to SIPTU will report for work, but will not take on duties normally done by IMPACT members.

Cabin crew describe their roster as “erratic”, saying it results in undue fatigue and stress.

However, Aer Lingus insists that extending the pilots’ roster to cabin crew would be costly and inefficient, and could mean moving 300 cabin crew posts to North America. 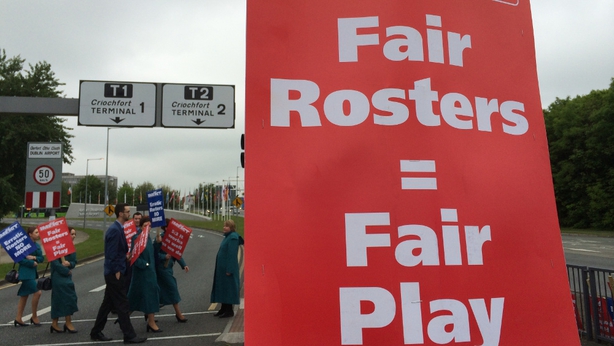 Aer Lingus management and the union are due to meet next week, but further industrial action by cabin crew has not been ruled out.

In a statement this morning, Aer Lingus said the “unwarranted and unnecessary” strike has caused huge disruption.

Director of Communications Declan Kearney said the strike should never have happened and “Aer Lingus cabin crew enjoy some of the most favourable working conditions in Ireland”.

He said changes to working conditions such as rosters, should be agreed in an “orderly and responsible manner” and customers should not be used as “leverage” by IMPACT in its negotiations.

The airline said All Aer Lingus flights to and from Belfast City Airport as well as all its regional flights are operating as normal.